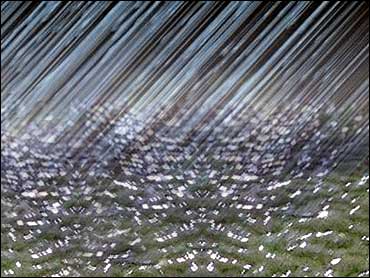 (CBS/AP)
NEW YORK (CBS) This past month's reputation as one of the rainiest Junes on record could have an upside... fewer murders.

In a previous analysis, the Times had found that the most deadly nights in the city are Saturdays in the summer.

Some experts stated that rainy weather could be decreasing the number of homicides because it reduced the chance of street interactions between strangers. Others, who weren't certain about the connection between murder and weather, pointed out that rain would not impact domestic disputes, which take place inside, or homicides connected with drug deals.

But rain des not only deter killers. When murders in the rain do occur, witnesses are scarce too.