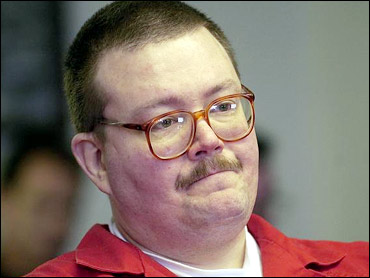 A convicted murderer who sought a reprieve so he could donate part of his liver to his ailing sister was executed early Wednesday.

Gregory Scott Johnson died by injection at 12:28 a.m. for beating and stomping an 82-year-old woman to death in 1985, then setting her house on fire to hide the crime.

His only words before being executed were: "Everyone has been professional."

Gov. Mitch Daniels rejected Johnson's request for a reprieve Tuesday, clearing the way for his death at the Indiana State Prison. The Supreme Court also denied a stay of execution.

Daniels said he found "no grounds to second guess years of court rulings or to reject the recommendation of the parole board."

The governor said he accepted the sincerity of Johnson's motivation in trying to donate part of his liver, but that medical experts had advised against it.

In a handwritten note released after he was executed, Johnson wrote: "There are those who claim that Debbie will have a new liver three weeks after being placed on the list. I'll be watching from above and expect her to be recuperating at that time."

The governor's office released a letter Daniels received from two transplant doctors who said the presence of a hepatitis B antibody in Johnson's system and his heavy body weight made him unsuitable as a donor.

Given the sister's condition and the fact that she likely will need a kidney as well, she would be better served by obtaining a full liver and kidney from the same donor through customary channels, the letter said.

The family of Johnson's victim, Ruby Hutslar, said they hoped he would be remembered as a cold-blooded killer, not for his last-minute attempts for a reprieve.

"I want him to be remembered as a man who viciously beat a sweet woman to death - not the man who tried to save his sister, but the man who killed Ruby Hutslar," said Hutslar's great-niece, Julie Woodard.