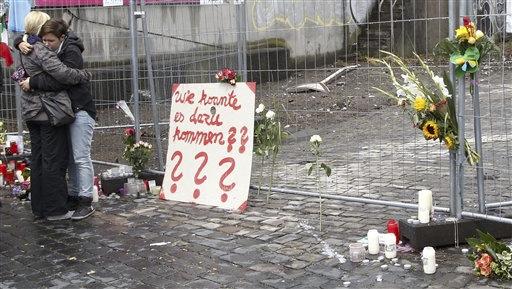 By the time young people turn 18, they've been bombarded with stories about the dangers of drinking and driving. And sadly, much of it falls on deaf ears. But one story is all but impossible to ignore. Correspondent Tracy Smith has the details.

Some students in Colorado and Wyoming are hearing a story that's changing their minds about driving drunk. And that proves that sometimes it isn't so much the message that counts, as the messenger.

The messenger, in this case, is named Clinton Haskins.

Smith says Haskins was a kid you'd be proud to know: good grades, wrestling in the winter, football in the fall, handed out toys at Christmas, rode in homecoming parades. He graduated from high school in 1998, and went on to the University of Wyoming, on a rodeo scholarship.

In the early morning hours of Sept. 16, 2001, Smith reports, Haskins was drunk from partying all evening when he climbed into his truck and rammed it head-on into a Jeep carrying eight members of the Wyoming cross country team.

When Haskins smashed into that Jeep, he drove right through it, Smith points out. It was Wyoming's worst traffic accident, ever.

All eight Jeep occupants were killed instantly. Only Haskins survived.

"You don't remember anything at all from that night?" Smith asked Haskins.

"No, ma'am," Haskins replied. "After I put my truck in gear, I don't remember anything at all."

There was no trial. Haskins pleaded guilty, and drew a sentence of 14-to-20 years at the maximum security state prison in Rawlins, Wyo.

Now 24, Haskins has made himself a spokesman for sobriety, Smith observes.

"If I can do anything to keep anyone from feeling one ounce of that pain," he says, "then all of my efforts will have been well worth it."

"(Haskins is) 25 years old," she tells Smith. "He really doesn't know. …He doesn't know what those of us who lost children lost. Because, he can't. ...He hasn't been a parent. He doesn't understand what it would be like to lose a child."

But Haskins helps teacher Craig Conrad, in effect, try to scare his students into sobriety.

Conrad is on a mission, and the driving force behind a program called The Unstoppable You.

In a large lecture hall in Haskins' alma mater in Craig, Colorado, Conrad tells Haskins' story which is, in itself, enough to horrify most kids.

But the most wrenching moment is when they hear Haskins' voice from inside prison walls, speaking to Conrad.

Haskins stresses that the eight victims would be alive today if he hadn't been drinking and driving.

For the most part, Smith notes, the students' faces reflect the horror of what they're hearing: of young lives lost -- or ruined -- by one careless, stupid act.

"My dreams for Clint," an emotional Lynn Haskins said, "have turned to worries. I worry about his safety, and how the environment of a maximum security prison will change who he is and the future he will have. I worry that the twinkle in his eye may be gone forever. And the pain will never go away."

She and Conrad got a standing ovation.

Afterwards, Clint Haskins' story seemed to have hit its mark.

Student Kiera Moore told Smith, "I don't want that to happen to my family and happen to other families."

"People die, and it's 100 percent preventable. Nobody has to die this way. Nobody," McLeland remarked to Smith.

But, while many of the victims' families want nothing to do with Clint Haskins, McLeland has found a way to forgive him and, Smith says, supports what he's doing.

Conrad has addressed thousands of students, Smith adds and, after each talk, the students he addressed take a pledge not to drink and drive.