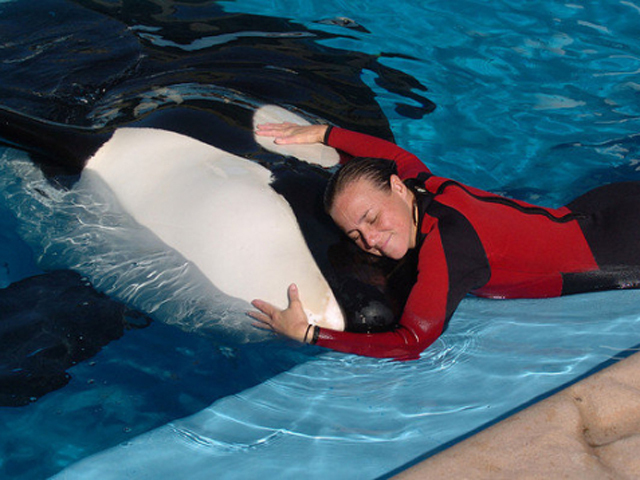 Last week at Orlando's SeaWorld, Tilikum, the killer whale that drowned a female trainer, performed for the first time since the tragedy at the world-famous marine park.

Though the whale's return to performing after more than a year apart from the show enraged animal rights activists and others, Dawn Brancheau's family shared a different response on "The Early Show."

Brancheau's family defended the park's decision to put the whale that killed her back in the show.

Since the death of Brancheau, 40, on Feb. 24, 2010, the family has set up a foundation in her memory. They said Monday they are focusing on who Dawn was -- not on the tragedy itself.

Brancheau died when the six-ton whale grabbed her ponytail and pulled her underwater during a performance. It took 30 minutes to get the whale to release Brancheau, who died from blunt force trauma and drowning. It was the third time Tilikum was involved in someone's death, CBS News Correspondent Mark Strassmann reported.

Brancheau's death led to a government fine and accusations of reckless behavior at SeaWorld.

However, Brancheau's family supports the company's decision to bring Tilikum back to center stage.

Brancheau's sister, Darlyne Klages said, "We -- just like Dawn, she loved and cared for Tilikum the best that she could. And we want that for Tilikum, also. So that's up to SeaWorld to decide what to do. If that's best for Tilikum, that's what we would want also."

When asked if the family would be concerned about other trainers getting back into the water with killer whales, Brancheau's sister, Deborah Frogameni, said, "Well, naturally, we would be concerned. Those are Dawn's friends. That's her SeaWorld family. She cared about them. We're still close to them."

She added, "But we're certainly not safety experts. And we really do leave that up to SeaWorld to who is ever handling this. We know that that's important to SeaWorld, also. So we're pretty confident that they're going to take that into consideration and that obviously trainer safety is important, but that they're not going to do anything to put their trainers in peril."

Diane Gross, Brancheau's sister, said, "You know, for a year, we've heard about the event. We're here today to tell you about our Dawn. She was the most inspirational, loving, joyous person you could have ever met. She did everything for everyone. She loved animals. She loved the environment. She loved children. She gave back her entire life. In her four years she had friends throughout her entire life and kept in contact with all of them."

Brancheau's mother, Marion LoVerde said getting through the past year has been difficult, but the support from family and friends has helped.

"Things are getting better," she said.

The Dawn Brancheau Foundation, she said, is "something positive" in her memory.

Amid ongoing federal investigations, SeaWorld has instituted new safety regulations. Trainers are not allowed in the water with whales and safety bars have been put in place to guard against further tragedy.

SeaWorld curator Chuck Tompkins, of Zoological Operations, told CBS News, "We're doing this in honor of Dawn and we're gonna continue to do that. We're not gonna forget her."

He added, "When we lost Dawn, it was like losing a sister, a family member, no doubt about it."

The foundation in memory of Brancheau is hosting a 5K run and family walk at SeaWorld in Orlando on April 16 -- her birthday. Benefits and a portion of proceeds will go to the Central Florida Children's Home. The existing education facility at SeaWorld will be named the Dawn Brancheau Educational Complex, Brancheau's brother Thomas LoVerde said on "The Early Show."

The foundation will also conduct a local community service project in Brancheau's memory at Give Kids the World.