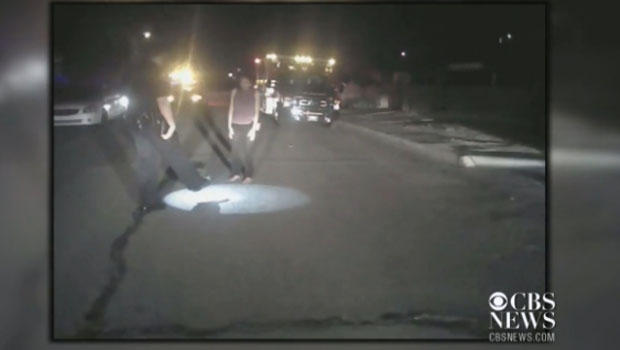 ALBUQUERQUE, N.M. -- Police say a mother went on a cross-town drunk driving rampage in Albuquerque earlier this month with her two children, 4 and 5, in the car. The aftermath of the incident was captured on police video.

Albuquerque police say the incident started April 5 when dispatchers got a call about a possibly drunk driver in a black SUV, reports CBS affiliate KRQE. When officers attempted to pull the driver over, the SUV fled.

Then, dispatchers got a call reporting a driver nearly hitting other vehicles on an interstate, followed by a call that a black SUV had crashed into a median. Then, a black SUV was reported to be hitting parked cars in a neighborhood.

When officers caught up to the vehicle, its tires were blown and it had come to a stop against another car on private property, KRQE reports.

Police identified the driver as 23-year-old Shirlena Charley. Police video showed her two children, 4 and 5, emerging from the car unharmed.

In the video, the older child can be heard telling an officer, “We’re not hurt.”

Later, the girl points to the tire damage and says, “Yikes!”

Police say Charley at first told them somebody else had been driving the car and fled. She’s seen on the video becoming belligerent and swearing at an officer. She was reportedly given a field sobriety test and arrested. Police say she had also been driving on a suspended license.

Charley was booked on two felony counts of child abuse.