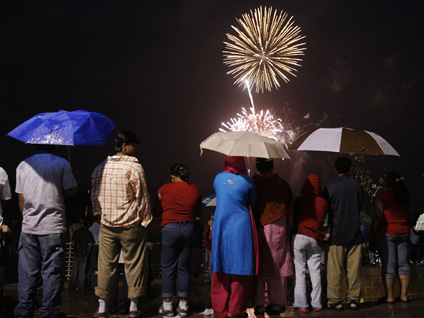 Kids get sluggish by age 15, with their physical activity dipping well below the recommended 60 minutes a day for good health, according to a new study.

Researchers tracked children beginning at age 9 and then again at ages 11, 12, and 15. At age 9, the kids were doing well, getting in three hours a day of moderate to vigorous physical activity, well above the 60-minute minimum suggested by most experts.

By age 15, they fell far below the recommendation, getting only 49 minutes on average on weekdays.

"We basically knew that kids were not as active as they used to be," says researcher Philip R. Nader, MD, professor emeritus of pediatrics at the University of California San Diego School of Medicine, La Jolla. "But I think the thing that surprises you was the degree and the speed at which physical activity declined."

Nader and his colleagues collected physical activity data on more than 1,000 children who participated in the long-running National Institute of Child Health and Human Development Study of Early Child Care and Youth Development. The children wore accelerometers, devices attached to the belt that can record movement minute by minute, for one week at each of four recording periods - at age 9, in 2000, and at ages 11 and 12, and again at age 15, in 2006.

"This study was started many years ago [in 1991] to follow kids' development over time," Nader tells WebMD. Besides physical activity, it looked at a host of other topics, such as the influence of nonmaternal care as more mothers returned to the work force.

At age 9, the kids were doing well. But by age 15, the teens only got 49 minutes of moderate to vigorous activity per weekday and just 35 minutes on Saturday and Sunday on average.

When did the decline begin? Girls fell below the recommended 60 minutes per day by about age 13.1 for weekday activity and boys, at age 14.7.

The kids didn't wear the devices when they were playing contact sports or swimming, Nader says, so the activity might have been underestimated. But even so, this isn't likely to account for the dramatic decrease in overall activity, the researchers write.

The study is published in The Journal of the American Medical Association.

Reasons for Decline in Physical Activity

"It's probably a combination of things accounting for the decline," says Nader, who points out that the study didn't go into why activity declines.

"If I was going to bet on one thing, it's the immediate environment," he says, noting that kids today don't go outside as much to play, partly because of safety concerns. "Teens today may have competing things," he says, such as computers and other technology that keeps them inactive.

But the study results should be a wake-up call to pediatricians, parents, and policy makers.

"As a pediatrician, this is upsetting," he says of the tendency for kids to get sluggish as they become teens. "As a physician and public health person, I would say it is alarming."

The findings of the study come as no surprise to Eve Kutchman, MEd, an exercise physiologist and coordinator for Healthy Kids, Healthy Weights, a program at University Hospitals' Rainbow Babies & Children's Hospital in Cleveland.

"My general overall feeling is it's right on," she says of the study results. What sets this apart from other studies, she says, is the hard numbers retrieved by use of the accelerometers. Most other studies rely on self-reported activity, she says.

Many parents sign up their kids for organized sports and think the issue of physical activity is taken care of, Kutchman finds. Not necessarily, she tells them.

While organized sports might be a good start, or adjunct, to a physical activity program, the actual moving time may not be enough. "A game might be two hours, but their kid may have just 15 minutes of active playing time," she says.

Nader tells parents to take walks with their children in the evenings and to plan longer, more vigorous workouts as a family on the weekends.