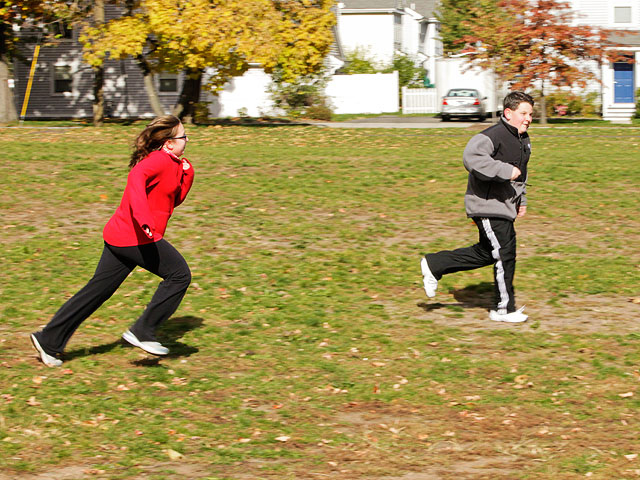 Researchers analyzed 50 fitness studies that were conducted between 1964 and 2010, and found today's kids run slower and have less endurance than their past counterparts.

The 50 studies included fitness results on more than 25 million kids from 28 countries. Researchers specifically looked at results that could predict the kids' cardiovascular endurance, namely how far they could run in a set time or how long it took to run a set distance.

They note kids can be fit in plenty of ways like if they're flexible gymnasts or strong weightlifters, but the ability to run multiple laps and sustain vigorous exercise is what's most important for cardiovascular fitness.

The researchers found kids' cardiovascular fitness declined around the globe by 5 percent every decade since 1975. In a mile run, kids are about a full minute and a half slower than children were 30 years ago.

Overall, kids were determined to be 15 percent less fit than their parents were as children.

In the United States alone, kids endurance levels fell by an average of 6 percent each decade between 1970 and 2000.

Researchers warn these generational declines in running fitness may suggest today's children and adolescents may grow into unhealthier adults at risk for heart problems.

"We need to help to inspire children and youth to develop fitness habits that will keep them healthy now and into the future," lead researcher Grant Tomkinson, a senior lecturer in the University of South Australia's School of Health Sciences, said in a press release.

The U.S. has seen a surge in childhood obesity rates during this time, which federal estimates reporting a tripling in obesity rates since the 1980s. Today, about 17 percent of U.S. children and adolescents are obese.

Tomkinson pointed out his study in fact found between 30 and 60 percent of the fitness declines may be attributed to increases in children's fat mass.

He calls on children to exercise for 60 minutes a day, focusing on activities like running, swimming or cycling.

"They need to choose a range of physical activities they like or think they might like to try, and they need to get moving," he said.

The research was presented Nov. 19 at the American Heart Association's annual meeting in Dallas. Findings presented at medical meetings are considered preliminary until they are published in a peer-reviewed scientific journal.

If American kids in particular need inspiration exercising, their parents might not be the best example. The Centers for Disease Control and Prevention found in April that 80 percent of U.S. adults don't meet the government recommended physical activity levels each week.

Children and teens who exercise may experience other health benefits: A recent study found adolescents who routinely engaged in moderate to vigorous exercise were more likely to have better grades at school than their unfit peers.