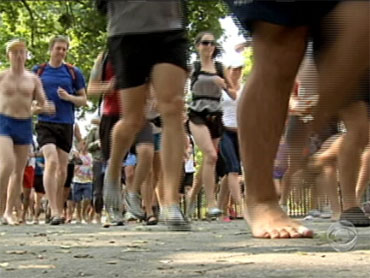 You might think that the only music kids today are dancing to is rap. But for The Early Show's Study Hall report, correspondent Melinda Murphy found out New York City's public schools are using classic tunes to teach kids manners and civility.

The fact that a New York elementary school is located in one of the city's poorer neighborhoods doesn't mean that its fifth graders will lack poise or social graces. They are learning them on the dance floor.

Ponickly is one of more than 30 ballroom instructors teaching dances like the foxtrot and swing in New York's inner city schools.

"We're teaching them that they matter, and that they can show it," Ponickly says.

The program was started by Pierre Dulaine, a four-time British exhibition champion. Eleven years ago, Dulaine offered to teach ballroom in one New York City school. Today, his instructors teach in more 60 schools.

Dulaine says, "It has developed into being an arts and education program where the children will learn about ballroom dancing, and the different dances from different countries. But most importantly, they learn teamwork, having to work with a human being in front of them. That's not easy for a young boy and girl, lady and gentleman to work with each other."
For Rosemary Tejada, the course has had an added benefit. She says, "I've gotten to be better friends with guys because I've known my partner since first grade, but we didn't really communicate a lot. But now, with ballroom dancing, we've communicated more."

At the end of every course, all the schools compete in a series of competitions. Tejada and her partner, Julian Perez, have made it to the semifinals.

"Here at the competition, I am really excited, but I'm also nervous," Tejada says.

To compete, teams must be profiecent in five dances: swing, rumba, foxtrot, tango and merengue. But each couple also has a specialty, and Tejada's is swing.

She says, "In swing, you really move a lot, and you feel in a happy mood. I get to express my feeling when I dance."

Just by looking at the kids dance, it is easy to see them getting excited about something as old-fashioned as ballroom dance.

He adds, "Quite honestly, I'm not interested that they remember every single step they learn, but learning to touch someone with respect is the key thing to all of this ballroom dancing."

In this competition, Tejada and her teammates won a silver. But Dulaine hopes they've also gained an interest in a pastime that promotes grace, manners and civility.

He says, "All of those children love to dance; they have their imagination, and this is what we need to nurture."

If you'd like to learn more, there happens to be a documentary movie about the program that just came out, titled, "Red, Hot Ballroom."