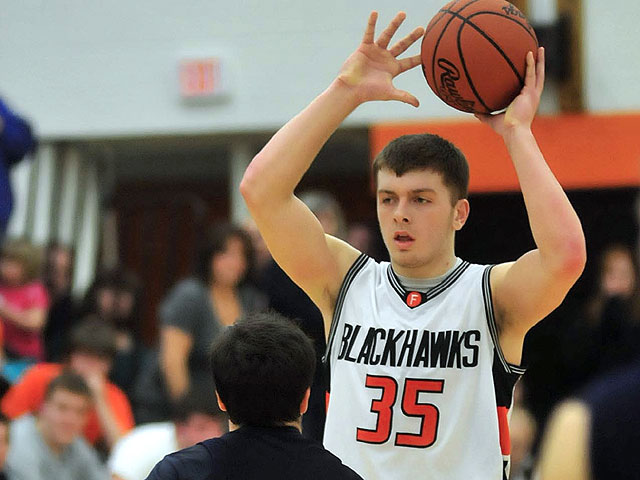 Fennville, Mich. was in mourning Saturday over the sudden, tragic death of beloved, star high school athlete Wes Leonard, who was remembered by an emotional uncle and coach as "uncommon" and "amazing." One said kids in Fennville wanted to "be like Wes," as opposed to pro basketball stars.

Leonard, a junior, sank a lay-up in overtime to conclude a come-from-behind win to end a perfect 20-0 regular season for the Fennville Blackhawks, sending them to the district playoffs.

The shot triggered a jubilant celebration on the court. But it all suddenly stopped, as Leonard collapsed and hit the floor, unresponsive. His teammates were stunned, and heartbroken. He died just two hours after collapsing, the victim of an enlarged heart that apparently no one knew about.

Leonard was, says Reynolds, in terrific shape, a two-sport athlete, a leader for his teammates, and more.

School officials haven't' decided yet whether the Blackhawks will take part in the playoffs, scheduled to begin Monday.

On "The Early Show Saturday Edition," Leonard's uncle, Jim Leonard, and basketball coach, Ryan Klingler, spoke haltingly about Leonard, tears streaming down their face, holding onto one another for support.

The family, Jim Leonard said, isn't coping well. "We're having a really tough time. It's... Wes left a, you know, just a huge void and I don't know how we're going to ever get over this, quite honestly. "

Klingler said Wes "touched so many people, not only in our school, but in our community. The teachers, the coaches that he played for. But even the people outside of Fennville. He just made -- he made friends wherever he went. He made them quickly and he made them closely. And, you know, we -- we had a motto last year on our team that we tried to strive by, as being uncommon. And Wes was uncommon. There's -- he was a passionate individual, with such a passion for life, to live it the right way, and just to make a difference. He wanted to be Wes Leonard. And he had a definition in his mind, in his soul, of what that meant. He was gonna do it."

Jim called Wes "an incredible basketball player. But as far as football goes, he may have been the best quarterback I've ever seen at the high school level. But that's nothing compared to the type of kid he was. Everybody loved him. I mean, people just wanted to be around him, of all ages. He was really good with even babies. He would hold them -- teenage boys don't want to be around babies. But he -- little kids, you'd see them after a basketball game, and little kids would just come up and want to just touch him, just because he was that -- that type of a guy.

"A friend of ours told me yesterday that the kids in Fennville don't look up to the Kobes (Kobe Bryant, superstar Los Angeles Laker) and the Lebrons (LeBron James, Miami Heat superstar), they want to be like Wes. You know. And then even adults, we sit in the stands, and we live our life vicariously through Wes. You know, it was -- it was amazing. The kid was amazing."