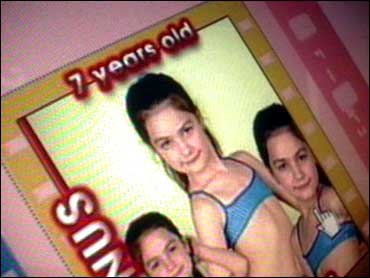 Although Ashley argued that the web site trueteenbabes.com that she appeared on was not pornographic, the Arapahoe County Sheriff's Office disagreed.

Last April they shut down the site and charged its owner and photographer, James Grady, with 880 counts of violating a specific Colorado statute against the Sexual Exploitation of Children. Grady is now in jail awaiting trial.

Mike Miller and Andy Contiguglia, Grady's attorneys, say Colorado authorities have gone too far. More provocative material is out there, they say, much of it commercially available in books and magazines, and isn't being prosecuted in Colorado. Plus, they argue, all the models had parental consent.

Sheriff Grayson Robinson is emphatic: "The young ladies involved were less than 18 years of age. They were put in a position to display their bodies. They wore rather flimsy, see-through material. Yet the body part was still exposed."

Robin, Ashley's mother, defends her participation in the site by saying she was only trying to help her daughter become a professional model.

But the Ford Modeling Agency in New York City, which represents nearly 300 teenage and child models, says they don't surf the Web looking for models.

Robin now regrets allowing her daughter to model for the site. And Ashley has since hired a professional manager, who landed her a part in an independent film.

But the business of underage internet modeling continues, with sites that feature very young, pre-teen girls in provocative poses and clothing.

48 Hours joined one of the pre-teen sites, CindyModel.com, to see what members receive. For $14.95 a month, members gain access to hundreds of photos of an 11-year-old child. Members can also buy CDs packed with even more photos, and even a DVD with video of Cindy.

To prevent her fans from finding her, Cindy's last name and location are kept secret. But her photographer's name and contact information are available through the Web site.

"Our objective with Cindy of course is to have her be a commercial actress, possibly have her own television show," says Newbury, who runs Cindy's site.

Newbury first put photos of Cindy on the Internet last April. At first, people could look for free, and on the first day, the site had 50 members. So Newbury decided to turn it into a pay site. There are now 400 paying members.

"If things stayed just the way they are right now, I would probably make about $50,000 a year," he says. And Cindy makes as much as $450 a week. Her father, Gary, a plumber, says that's more than he makes some weeks.

Newbury says he wants to make Cindy a star. Her mother Tracy dreams of that too. "She's having a blast. We all are," says Tracy, who is in marketing.

Newbury spends more than 10 hours a day tending to his new business. He promotes Cindy aggressively and apparently it's working. An online fan club devoted to her has over 4,000 members.

Some members even send in outfits for Cindy to model. That service costs $150. One man sent in a schoolgirl outfit for Cindy to model on line. Newbury says other people have sent in items he considers inappropriate, like thongs, which Cindy will not model.

Tracy says she doesn't know much about who the members of her daughter's web site are. "Curt handles all that," she says.

"A lot of the people who buy these, I'd say, are 40-year-old men," Newbury says. He says that many members are middle-aged men and he admits that some of them are looking at the pictures sexually.

Dr. Fred Berlin, a psychiatrist at Johns Hopkins Univerity Hospital who treats patients with sexual disorders, says that an older man who belongs to the site is likely to have "something very different or abnormal about his sexual make-up."

Why would an adult pay $15 every month to belong to this site? "I think adults who are doing this have some sort of infatuation with this youngster," says Berlin. "And I think in some cases they may have romantic fantasies. In some cases sexualized fantasies."

Tracy says that older men will look at Cindy in real life, so why not online. "I would never exploit my daughter. I am promoting her natural beauty," Tracy says.

Berlin says that there is a chance a determined member could find Cindy's real address. Newbury worries about that too. But he says he keeps her identity secret. He admits, though, that he himself is more easily found. Members do have some contact with Cindy during bi-weekly "video chats", and some members apparently try to get even closer by sending Cindy gifts.

There is some legislation being introduced nationally that would ban child modeling Web sites in an effort to protect the child models. But for now, these Web sites are legal, and prospering.

"There may be a large number of people out there who are privately attracted to children, who don't act on it. And as a society we're going to have to figure out how we want to deal with it," says Berlin.

Back To Part I

End of the Trail

Could Georgia teacher's murder have been solved years ago?
Thanks for reading CBS NEWS.
Create your free account or log in
for more features.
View CBS News In
CBS News App Open
Chrome Safari Continue
Be the first to know
Get browser notifications for breaking news, live events, and exclusive reporting.