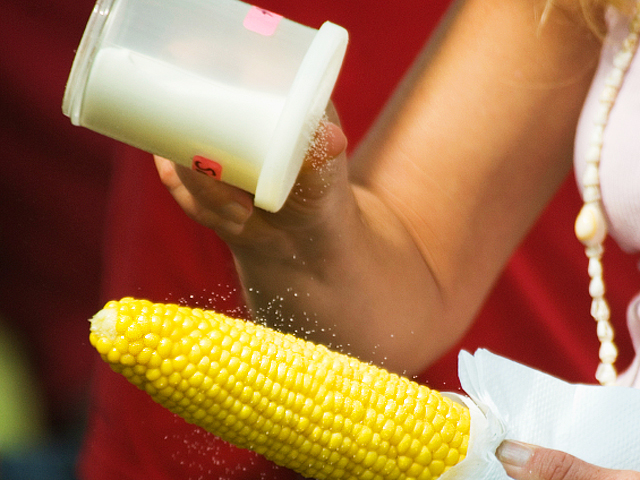 (CBS/AP) American kids eat about 1,000 milligrams of salt more than they should each day - just like adults, a new government study finds. That's about the sodium equivalent of a Big Mac.

The study of U.S. children also shows that the extra salt is tied to an added risk for higher blood pressure, especially in kids who are overweight and obese.

The new findings from the Centers for Disease Control and Prevention (CDC) were published online in the Sept. 17 issue of Pediatrics.

Previous research has shown similar results in adults but studies on salt, weight and blood pressure are uncommon in children.

For the study, researchers at the CDC looked at data on 6,200 kids aged 8 to 18 involved in 2003-08 national health surveys. The children were asked twice over several days to detail all foods they'd eaten the previous day; the researchers calculated salt intake from their answers.

Those who ate the most salt faced double the risk of having elevated blood pressure, compared with those who ate few salty foods. Thirty-seven percent of the kids in the study were considered overweight or obese. Among them, the risk for high blood pressure was more than triple.

The recommended daily salt or sodium intake for kids and adults is no more than 1 teaspoon daily, or about 2,300 milligrams. On average, study kids ate nearly 3,400 milligrams daily. Male children were more likely to consume more salt than female children.

CDC researcher Quanhe Yang says it's unclear why heavier kids would be more sensitive to salt but it could be due to obesity-related hormone changes. The results raise concerns because studies have shown that elevated blood pressure in childhood, even just prehypertension, can lead to full-fledged high blood pressure in adulthood and potentially premature heart disease.

Prehypertension and high blood pressure in children younger than 17 depend on age, height and gender.

Earlier this year, a CDC study named the for dietary sodium in the U.S. diet, foods such as salty snacks and pizza, with some surprises at the top of the list.

To reduce salt intake - and risk for heart disease and stroke - the CDC recommends eating a diet rich in fresh or frozen fruits and vegetables without sauce. Processed and restaurant foods contain the most salt, the CDC says, so be sure to check nutrition facts for information or request lower-sodium options when eating out.

The CDC has more on reducing salt intake.