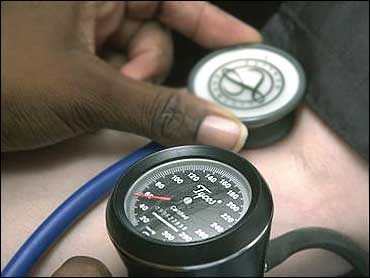 Some people appear to be born at risk for high blood pressure, with far fewer filters than normal in their kidneys, a study found.

Doctors do not know how big a role is played by this kidney condition, which occurs when a mother doesn't eat enough protein. Nevertheless, the small German study raises the possibility that for some, susceptibility to high blood pressure begins before birth.

Dr. Leslie Spry, a spokesman for the National Kidney Foundation, said the study offers the first anatomic evidence in people to back up a long-standing theory.

The study, which appears in Thursday's New England Journal of Medicine, was conducted by Kerstin Amann of the University of Erlangen-Nurnberg, and colleagues there and at the University of Heidelberg and City Hospital of Darmstadt.

The researchers found 10 men who had died in accidents and had had high blood pressure. Each was matched with another accident victim of the same age, sex, height and weight who had not shown any sign of hypertension.

Painstaking counts found that the kidneys of the healthier people had two to three times more filters - twisted masses of blood vessels called glomeruli - than their counterparts with high blood pressure.

"This is certainly another piece of the puzzle that falls into place to make us more comfortable that we are on track to understanding the cause of hypertension," said Dr. Dan Jones, associate vice chancellor at the University of Mississippi Medical Center.

Spry said he would like to see a similar study among blacks, who for unknown reasons are more likely than whites to have high blood pressure. Fewer glomeruli could be one explanation, he said.

The study also indicated that the best treatment for hypertension may be a combination of older drugs called diuretics and newer medicines that lower pressure within glomeruli, he said.

"If one conceptualizes that people with high blood pressure have big, old, fat glomeruli and not many of them, it stands to reason these big, fat glomeruli are under pressure," Spry said. "The good news is we have very good medicines to lower pressure within the glomeruli" - ACE inhibitors and angiotensin II receptor blockers.

Amann said the findings also highlight the importance of diet during pregnancy, because a pregnant woman who does not get enough protein is likely to have a baby with fewer kidney filters.

"This is perhaps the only definite knowledge we have" about potential causes, she said.