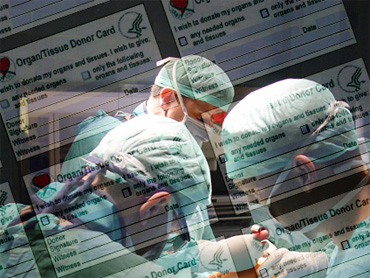 Since our story last night, Garet Hil says, 204 people have signed up to donate a kidney and start a new chain. That's a huge jump from the one or two they get on a normal day.

The work of the National Kidney Registryhas galvanized 50 centers across the country, transplanting record numbers of kidney patients over the last three years. On Thursday, the momentum will continue with the largest kidney chain to date, a swap that is expected to save 28 lives at the Methodist San Antonio Transplant Center in San Antonio, Texas.

A couple who are on a mission to help took CBS Evening News anchor Katie Couric inside an earlier kidney exchange. They're a group of people bound by selflessness and the American Spirit.

Three years ago, Jan and Garet Hil watched their life unravel when their 10-year-old daughter, Samantha, had complete kidney failure brought on by a rare genetic disease.

"We really have experienced, I think, just about every barrier that you could possibly hit," Jan said.

"Before this diagnosis," Couric asked, "you knew nothing about kidney failure?"

"I knew nothing about it," Jan replied.

"I didn't even know I had two kidneys before this," Garet said. "It was, you know, not on the radar."

They began a frantic search for a kidney. Samantha finally found a good match from her 23-year-old cousin. But the experience inspired Garet to help other desperate families.

To submit an idea for The American Spirit send us an email.

He applied his skills as CEO of a software company to launch the National Kidney Registry- the largest national database of living donors in the country.

(Scroll down to learn how to be an organ donor.)

"The bigger the swap you can get done, the more people can get transplanted faster," Garet said.

Today, his database holds nearly 100,000 records of people who need kidneys and their loved ones willing to give up one of theirs to anyone who promises to keep the donor chain going.

"That's the fascinating thing," Garet said. "You don't know where it's going to go."

That's what we found when we went inside one of their swaps, saving 10 lives in three states. There were 20 surgeries in all - most of them happening over a 6-day period.

It all started with Max Zapata, from Clovis, Calif., who kicked off this chain as the "good Samaritan" donor. He gave a kidney and expected nothing in return.

"I just really felt that it was something that I needed to do in my heart," Zapata said. "I didn't know where it would go, but that I knew that it would be something that would help someone out."

Zapata gave his kidney to 25-year-old Laura Amador - a vibrant college athlete, whose lungs and kidneys were failing as the result of a rare autoimmune disorder.

"I was scared, I was terrified," Amador said. "How does somebody go from this active college life, to one minute, I can't walk?"

Amador got Zapata's kidney because her brother Paul agreed to donate his kidney to another stranger, Kirk Larson, a 45-year-old geologist.

Larson's wife, Teresa, would donate her kidney to someone on the other side of the country.

"The more involved you get and the deeper you get into the process - it's a totally exciting experience really," Teresa said.

Teresa Larson's kidney travelled over 3,000 miles to New York Presbyterian Hospital to save Melvin Gellman - a spry 83-year-old lawyer from Long Island. Gellman is probably too old to have received a kidney off a normal waiting list.

"It's wonderful. I'm glad I got here," Gellman said. "I've been living for this day."

His transplant was happening because a close family friend, Tonya Nye, was giving her kidney to Maria Polli, a mother who thought she would have to wait seven years.

"I don't know if I could ever thank her enough," Polli said. "It is hard to not be able to do things with your kids when you want to."

The chain of life continued from Polli's husband John to Simeon. From his son John to Lee. From his daughter Lauren to Daniel. From his friend Clint to Fred. From his wife Yvette to Greg. Greg's uncle Johnny Guarnes donated to the last patient in this chain, Mindel Faustino.

Faustino expected to die waiting. But he received a call that Guarnes was his perfect match.

Faustino said, "I hope there's a lot more men like him."

The kidney chain has had a profound effect on Garet Hil. "What we're doing right now, has had more impact than anything I've done, you know, ever."

One year after Max Zapata kicked off the kidney chain, all 10 patients are doing well.

"When you see those people who have come out of these swaps and they've got the transplant, it's a miracle," Garet said.

A New Chapter In R.J.'s Story