After being held captive for 74 days on the island of Sulu by the Abu Sayyaf (an al Qaeda-linked Islamic militant group), the fate of three International Committee of the Red Cross (ICRC) workers still hangs in the balance, even as more than 1,000 government forces have withdrawn from their positions — a demand of the kidnappers.

"This is a complete turnaround from our previous position of not pulling out, because of our desire to settle this crisis peacefully," said Sulu Governor Abdusakur Tan in an interview with Sulu-based reporter Nickee Butlangan.

But Abu Sayyaf Commander Albader Parad told Tan by telephone that nothing less than a total pullout is acceptable. He added that they would not release any of the hostages, and renewed the group's threat to behead one of the hostages if their demand is not met by the end of the month.

They want all government forces to move back to Jolo, the capital city of Sulu, effectively ceding control of the rest of the island and its half-million residents. The Abu Sayyaf is considered to be terrorists by the United States government for its involvement in several high-profile kidnappings and deadly bomb attacks. 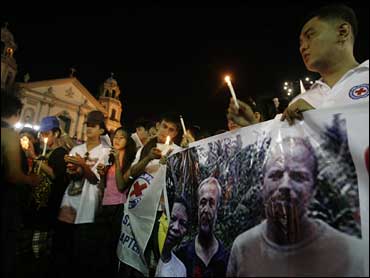 Jakob Kellenberger, president of the ICRC, made a rare public appeal for the Abu Sayyaf to free the aid workers.

"It is impossible to understand what the kidnappers could possibly achieve by hurting them," Kellenberger said in a statement. "Harming a humanitarian aid worker cannot be justified under any ideology or religious law."

In a phone call to a local network earlier in the week, Lacaba appealed to the government to act quickly to end the standoff.

She said that they were afraid for their lives "every minute, every second because we don't know when a firefight will suddenly start."

Last week, a firefight ensued after Marine snipers fired at militants trying to breach a military cordon, leaving three Marines and up to seven members of the Abu Sayyaf dead.

Since then, government troops have moved back twice, although the military had earlier rejected a demand for a pullout after the militants reneged on a promise to free a hostage last week.

But Interior Secretary Ronald Puno told reporters last Saturday that they have agreed to remove government forces to show that they have bent over backwards to ensure the safety of the hostages.

Meanwhile, in an interview with a local network, Parad, the acting spokesperson for the Abu Sayyaf, said that they would let one captive go if the military showed signs of movement.

"Even if the retreat is not completed within 36 hours, as long as we can see a total pull-out happening, we will turn over one of them," he said.

Still, it is not clear what the militants' next move will be, as the government has ruled out the possibility of a total pullout, as such a move would lead to chaos and anarchy in Sulu, Tan said.

As far as the government is concerned, they have pulled out of the main stronghold of the Abu Sayyaf, well ahead of the 36-hour deadline.