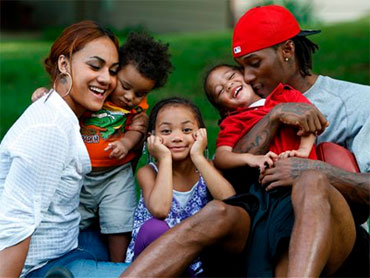 A man infamous for kidnapping a young boy 30 years ago was convicted Monday of trying to buy a child last year in what a prosecutor described as the would-be "last hurrah" of a long criminal career.

Kenneth Parnell was convicted of trying to persuade a woman to procure him a young boy for $500. Now 72 and in a wheelchair, Parnell was convicted in 1980 of abducting 7-year-old Steven Stayner, changing the boy's name and keeping him for seven years. Stayner's story was later told in a book and TV movie, "I Know My First Name is Steven."

There was no actual child in the current case. The woman, Diane Stevens, cooperated with police in setting up a meeting in which she was to give Parnell a birth certificate for $100 and procure a child for $400 more.

The prosecutor, Tim Wellman, said outside court that Parnell could face up to life imprisonment under the state's "three strikes" law, but the defense plans to argue that the prior cases are too old to be relevant.

In addition to the Stayner kidnapping, Parnell was convicted of kidnapping 5-year-old Timmy White in 1980. He served five years for both abductions. Parnell also has a 1951 conviction for committing a lewd act on a minor.

"He has been committing felonies since he was 19 years old," Wellman said.

Parnell's lawyer, Deborah Levy, urged jurors Monday not to focus on the past. "What happened 30-some years ago doesn't help us here today," she said.

Levy said that Parnell never used the word "kidnap" and suggested that he was simply interested in raising an abandoned boy.

But Wellman said Parnell is a lifelong predator, introducing testimony from the earlier kidnappings as evidence. The prosecutor also noted that Parnell, using a more vulgar term, asked for a child with a clean bottom. That, said Wellman, indicated a sinister purpose.

Parnell was arrested shortly after White's abduction. Stayner, then 14, escaped and took the boy with him to police, saying he didn't want the 5-year-old to go through the same ordeal he had.

Stayner died in a motorcycle accident in 1989. Stayner's brother, Cary, was sentenced to death last year after being convicted of killing four women in Yosemite National Park.

"The defendant was looking for one last hurrah," Wellman said. "One last Steven Stayner. One last Timmy White."