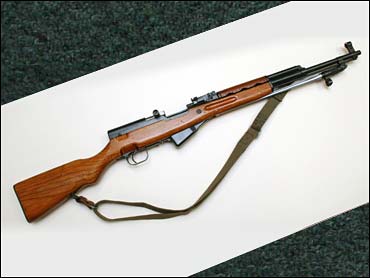 (AP)
JACKSON, Mississippi (AP) Police had been watching Vincent Goff for years, convinced he was the masked man who sexually assaulted couples at gunpoint on the Mississippi coast. But before investigators closed in, they say Goff picked the wrong victim and was beaten nearly to death with his own rifle.

Goff, a 37-year-old unemployed Biloxi man with a wife and two stepsons, was being held Wednesday in the Harrison County Jail after spending five days in a hospital recovering from severe head wounds.

Little is known about Goff's background or the unidentified man who beat him so hard that the wood stock of the rifle broke. But authorities say Goff's arrest caps a terrorizing series of attacks that began on the sandy banks of the Biloxi River in 2006.

Goff allegedly approached a man and woman last Thursday afternoon on an isolated logging road in Harrison County and forced them into the woods with a rifle, Sheriff's Maj. Ron Pullen said Wednesday.

They were forced to strip off their clothes and told to perform sexual acts when the male victim, described as a physically fit member of the military in his mid-30s, wrestled the gun away.

As the victims were getting dressed and calling police, the attacker staggered to his car and sped away.

A deputy pulled Goff over based on a description of the car and tag number. The officer called for medical assistance and Goff ended up in an intensive care unit, Pullen said. He need numerous staples to close the gashes in his head.

Goff was charged with six counts of kidnapping, five counts of sexual assault, two counts of aggravated assault and one count of molesting an underage girl for crimes dating back to 2006. He does not have an extensive previous criminal record.

Pullen said he doesn't think Goff has a lawyer and would likely be appointed a public defender.

The first suspected assault was on construction workers who came to the Mississippi Gulf Coast to find jobs in the wake of Hurricane Katrina, Pullen said. The man and woman had not been able to find a place to stay and were camping on the banks of the Biloxi River. A masked attacker approached early that morning, pointed a rifle and made the couple disrobe.

"He forced them to do sexual acts on each other and then he participated in it," Pullen said.

A man and underage teenage girl were assaulted in a nearly identical attack only a few months later. The attacks become increasingly violent, though the victims were not badly hurt, Pullen said.

Over the next few years, there were other attempted assaults in the area by a masked man with a rifle — one couple escaped by jumping into the river and swimming to the other side, Pullen said.