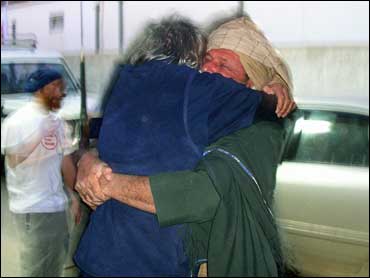 An Italian journalist held for two weeks in Afghanistan said after his release Monday that he saw his captors cut off the head of one of the two Afghans kidnapped with him and thought he would be next to die.

In an interview with RAI Tg3 News, Daniele Mastrogiacomo described a harrowing experience. "I saw him be decapitated," he said.

He said the kidnappers threw the Afghan to his knees and suffocated him in the sand as they cut his head off.

"Then they wiped the knife on his clothes. I was shaking. Obviously I thought 'it's my turn now,"' Mastrogiacomo said.

Mastrogiacomo said he was struck in his back and head with an AK-47 during his capture, but was not hurt at any other time. "If they needed a blanket, they gave me one too. If there was bread to share, they shared it with me, so that was not a problem," he said.

The fate of the other Afghan who had been with the journalist was not immediately known.

In an earlier audio posted on the Web site of his newspaper, La Repubblica, Mastrogiacomo said he slept in 15 different prisons that were "as small as sheep pens." His hands and feet were chained, and he was made to walk for miles in the desert, he said.

Mastrogiacomo said knowledge of the support of his colleagues and countrymen gave him strength.

"I knew that Italy was supporting me, and that was the only comfort in the most desperate moments, when I feared I was going to be killed at anytime soon," he said. "This is the most beautiful moment of my life."

Mastrogiacomo, 52, who had worked for the newspaper in Afghanistan, Iran, Iraq and elsewhere since 2002, was kidnapped March 5 along with the two Afghans while traveling in Afghanistan's southern Helmand province. Taliban insurgents claimed responsibility.

The journalist arrived Monday at a hospital in Lashkar Gah, in southern Afghanistan, where the Italian-led aid group Emergency is based, Italian Premier Romano Prodi said.

"He is in good health and I expect that in a few days, we will be able to hug him," Prodi said.

Ezio Mauro, editor of La Repubblica, said he knew of no ransom paid in exchange for Mastrogiacomo's release. But questions began to surface about how the journalist's freedom had been secured.

Alfredo Mantovano, an opposition senator, pointed to reports in Afghan media that five Taliban extremists were released in exchange for Mastrogiacomo. Officials in Afghanistan had not confirmed the reports.

Italian troops are in Afghanistan "to help with the country's reconstruction, achieving that also by combating terrorism," Mantovano was quoted as saying by the ANSA agency. "Now it turns out that terrorists are released in exchange for the release of an Italian. There are no known precedents for that in Italian missions abroad."

Ettore Francesco Sequi, the Italian ambassador to Afghanistan, said in Kabul that Mastrogiacomo would arrive in the Afghan capital Tuesday and leave for Italy shortly afterward.

"I believe that there has been team work by all the Italian authorities and Afghan authorities, both institutions and (people), like Emergency, which has played a great role." Sequi said.