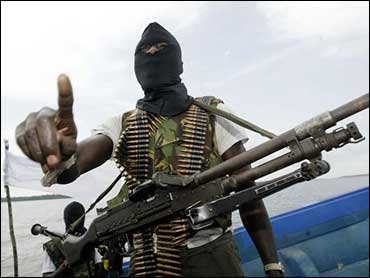 A local government spokesman confirmed the release Sunday of all eight kidnapped foreign oil workers in Nigeria, saying he was with them in the presence of the governor of a southeast Nigerian state.

"All the hostages have been released. They are with the governor now," said Ekiyor Welson, spokesman for Bayelsa state in the southern Niger Delta region where the eight were kidnapped from an offshore oil rig on Friday. He spoke from the state capital, Yenagoa.

Six Britons, one American and a Canadian were kidnapped from a rig that was drilling off Nigeria's southern coast. The oil rig was operated by Aberdeen, Scotland-based Dolphin Drilling Ltd. for the Nigerian oil company Peak Petroleum.

Confusion had surrounded the men's fate earlier Sunday, with a police spokesman first reporting all eight were released, then retracting his statement to say that the kidnappers had released only two Britons and agreed to set the others free but had not yet done so.

However, a British diplomat in the commercial capital, Lagos, confirmed the eight men had been freed. He spoke on condition of anonymity because he is not authorized to speak to the media.

Police had said Saturday they were negotiating with the kidnappers. They declined to say whether a ransom was paid, and did not say who was responsible for the hostage-taking.

In recent months, oil-region militants have blown up oil pipelines and kidnapped other foreign workers.

The Movement for the Emancipation for the Niger Delta, the main militant group responsible for a wave of attacks and hostage takings this year in the oil-rich southern delta, has said it was not responsible for the latest kidnappings, which it believes were purely a moneymaking scheme.

The group, known as MEND, is campaigning for a better distribution of Nigeria's oil wealth. Its actions have cut oil production in the country and helped drive prices higher on international markets.

Speaking before the hostages' release, Dolphin spokeswoman Sheena Wallace said she did not have the names of the missing crewmen or information about demands or know what group was behind the kidnapping. Local representatives of the company could not be reached for comment.

Nigerian militants have tried to justify other such kidnappings as part of their campaign for local control of oil revenues by inhabitants of the country's south, who feel cheated out of the oil revenue. Other groups have kidnapped oil workers as bargaining chips to prod companies to increase jobs or improve benefits. The kidnappings usually end peacefully.

Dolphin's Wallace said the kidnappers had struck the platform, about 40 miles off the Nigerian coast, at about 5 a.m. Friday. There were 84 people on board.

Last month, an unidentified gunman riding a motorcycle shot and killed an American traveling in a car to work at the offices of the U.S. drilling equipment maker Baker Hughes Inc. in the southern oil hub of Port Harcourt.

Nigeria, which normally pumps 2.5 million barrels of crude a day, is the fifth-largest source of oil imports to the United States.

Oil prices jumped by almost $2 a barrel Friday after reports of the kidnappings. Even though no output was affected, the news reignited concerns about the stability of supplies in the oil-rich African nation.