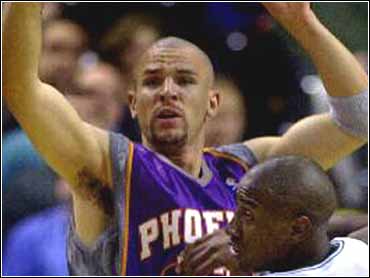 Jason Kidd likes to have the ball in his hands. On Friday night, though, he was booed nearly every time that happened.

Playing for the first time since being charged in a domestic assault case, he understood.

"It didn't bother me. It's part of the game," he said after scoring just 12 points as the Boston Celtics beat his Phoenix Suns 99-83.

Kidd, the NBA leader in assists, missed the previous four games after being charged last week with domestic violence assault, a misdemeanor. His wife, Joumana, told police he punched her in the face at their suburban Paradise Valley home during a quarrel over feeding their 2-year-old son.

Kidd didn't start Friday's game and was rusty after entering with 4:14 left in the first quarter. But he was glad to return to work.

"I needed to get back, to get back to life the way it was," he said after the game. "We had an incident, but life doesn't stop. We all make mistakes. This is my job. I'm going to face it head on."

Kidd had just four points through three quarters, then scored eight in the fourth. He added eight rebounds and five assists in 31 minutes. He also committed five turnovers.

"I thought he did some good things," Suns coach Scott Skiles said. "The way he played was understandable."

The crowd cheered Kidd for the first time when he missed two free throws with 29 seconds gone in the second quarter but continued to boo him as the half went on. At halftime, he was scoreless in 10 minutes as Phoenix trailed 45-44.

"I wouldn't be here without the support of my wife," he said. "I'm back in my job and this is the right thing for me to do."

He was not with the team for the last game of a homestand and the first three of the current six-game road trip. Phoenix was 1-3 in that stretch.

Kidd began Friday's game as the NBA leader in assists with 9.9 per game and was sixth in steals at 2.06. He was Phoenix's second-leading scorer with 16.6 points per game, while averaging 6.3 rebounds.

"We prepared for Jason Kidd all along," Celtics coach Jim O'Brien said, "so it doesn't surprise us that he's back. It's good for the Phoenix Suns that he is."

Kidd had been expected to miss the entire six-game road trip.

Skiles said he hadn't had any expectations of when Kidd would return and learned Thursday night about the point guard's plan to play Friday night.

Before the game, Skiles said he expected Kidd to be booed.

"The last couple of games we've gotten some of those catcalls behind the bench when he hasn't even been there," Skiles added. "That's the nature of things."

For Paul Pierce, who had 28 points for Boston, it was a welcome change from the booing directed at the Celtics before their current 4-2 spurt.

"It wasn't distracting for us," he said. "At least they were booing the other team."

Police had said Kidd acknowledged hitting his wife, and a judge barred him from being in contact with her. On Tuesday, however, another judge allowed him to rejoin his family so the couple could pursue the reconciliation counseling they had begun.

"Sometimes when you go through tough times it makes you a better person," Kidd said.

In his absence, the Suns lost to the Golden State Warriors 103-95 at home and then dropped their first two road games to Utah 109-98 and to Minnesota 82-73 before beating the Detroit Pistons 106-73 on Wednesday night.