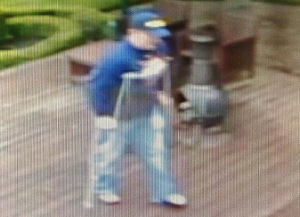 (CBS) PONTIAC, Mich. - A man who rammed his van into the gates of musician Kid Rock's Michigan home in an attempt to break in has apparently been captured - and he was on crutches, Oakland County sheriff's deputies tell CBS Detroit.

Sheriff Mike Bouchard says the 43-year-old suspect from Independence Township is facing more than one charge for the attempted break-in in Clarkston on Wednesday afternoon, July 31.

"He damaged severely some property, obviously, when he was breaking down the gate to get in so he's got malicious destruction of property or damage to property, he got an attempt of home invasion, he's got a variety of potential charges," Sheriff Bouchard told CBS Detroit.

He told the station that tips from the public led authorities to the suspect.

"A full size older model window van - a Ford model - window van, and the individual was a white guy on crutches, looked to be wearing a Michigan hat," noted Bouchard. "So the combination of those two things we figured would be pretty unique. So if somebody saw it they'd go 'oh, I know who that is.'"

In addition to the widespread publicity surrounding the case, Kid Rock offered a $5,000 reward for any information leading to an arrest.