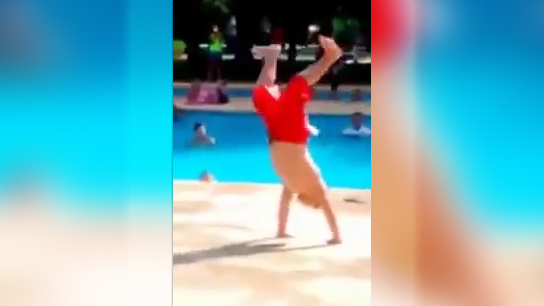 Some of the latest and greatest viral videos include a boy tearing up the pool deck with a lip-sync and dance routine, plus a GoPro strapped to a sea turtle.

Guillermo Gael Delgado Garcia is one heck of an entertainer. With a high-energy dance and lip-sync to the rumba song "Cuban Pete" by José Norman, he takes over a public swimming pool in Monterrey, Nuevo León, México. His uncle, Lazarin Delgado Oviedo, took out his camera and shot this video which has already been viewed over 5 million times.

Scientists with World Wildlife Fund Australia carefully strap a GoPro camera to a sea turtle as they set it free from captivity, and capture this beautiful footage of the Great Barrier Reef. The idea is part of a larger project to study the level of pollution affecting turtles within the reef.