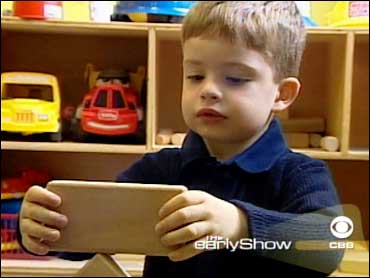 When you think of an expelled student, you probably picture an unruly teenager causing mischief in the high school hallway.

But guess what? A new study says preschoolers, just 3 and 4 years old, are far more likely to be kicked out of their pre-K programs. It's a problem very much in need of attention from both educators and parents.

A researcher in the study, Dr. Walter Gilliam, an assistant professor at Yale University Child Study Center, says, "We found that children in pre-school programs were literally...more than three times as likely to be expelled as children in the kindergarten through grade 12 years."

The study also found that when teachers had access to a behavioral consultant in the classroom, expulsion rates were cut in half, Gilliam says. But few pre-Ks are able to offer that amenity.

At Kangaroo's Korner, every effort is made to keep pre-schoolers in school. Founder and president Catherine Risigo-Wickline says, "If we can look at where a child is functioning, and not put that child into our curriculum, but rather design our curriculum to meet that child's needs, you get away from kids getting frustrated because they can't do that activity or are bored because the activity is not challenging enough."

Goodman says playing the blame game is not the way to go, not is it to label the child as "a problem."

Hopefully, you'll feel comfortable enough with the teacher so you can work together. But if not, you should seek outside help.

"Get somebody else to observe; get somebody to give you some parenting tips," Goodman says. "Maybe there are things that you can do at home that you can suggest to the teacher, or you can have that consultant then consult to the school and look at the entire situation to find out what's better."

'Five People You Meet In Heaven'