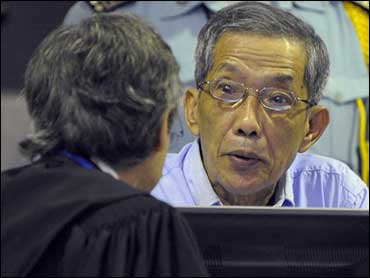 Khmer Rouge guards killed babies by battering them against trees under an official policy to ensure the children of the brutal Cambodian regime's victims could never take revenge for their parents' deaths, the group's chief jailer testified Monday.

Kaing Guek Eav, alias Duch, said he was to blame for the brutal killing of infants as the commander of the Khmer Rouge's notorious S-21 prison in Phnom Penh during the 1970s. As many as 16,000 men, women and children are believed to have been tortured there before being sent to their deaths.

"I am criminally responsible for killing babies, young children and teenagers," Duch, 66, told a U.N.-assisted tribunal. He never mentioned if he had personally carried out such killings. "It was done by my subordinates. I do not blame them because this was under my responsibility."

Duch is being tried by the genocide tribunal for crimes against humanity, war crimes, murder and torture. An estimated 1.7 million Cambodians died under the 1975-79 communist Khmer Rouge regime from forced labor, starvation, medical neglect and executions.

Last year, the tribunal took Duch to S-21 - which is now a museum - and the area where prisoners were executed, and he was shown drawings of Khmer Rouge guards swinging babies by their legs and pounding their heads against tree trunks.

"The horrendous images of the babies being smashed against the trees, I didn't recognize it at first," said Duch. But he admitted that after also seeing photographic portraits of children who had been held at the facility, he recalled that such things had happened.

"There is no gain to keep them, and they might take revenge on you," Duch said, reciting the policy that he said he learned from the regime's former defense minister, Son Sen.

It is not known how many young children were killed at S-21. Photographers kept meticulous records of adult prisoners, but pictures were not routinely taken of babies and young prisoners.

Duch denied one of the grisly allegations in the prosecutor's indictment: that children of S-21 prisoners were taken from their parents and dropped from third-floor windows to break their necks. Duch told the tribunal that hurling children from windows would have panicked other prisoners, which would have run contrary to his orders. He said prisoners were supposed to be kept in the dark of their destiny to be killed.

Duch is the first senior Khmer Rouge figure to face trial and the only one to acknowledge responsibility for his actions. Senior leaders Khieu Samphan, Nuon Chea, Ieng Sary and Ieng Sary's wife, Ieng Thirith, are all detained and likely to face trial in the next year or two.