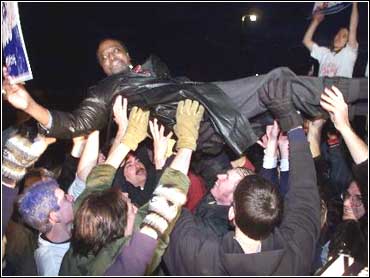 Lifted by his oratory against abortion, Alan Keyes came in third in the Iowa caucuses Monday night, claiming the right to move his campaign into New Hampshire with confidence.

"I'm sure our supporters will take heart from this," said Keyes, a conservative talk-show host and former foreign service officer in the Reagan administration who scored well in a slew of GOP debates leading up to the caucuses.

So elated was Keyes, in fact, that he was seen "crowd surfing" - or being passed above the heads of cheering supporters - Monday night as the Iowa numbers came in.

The only black presidential candidate in either major party, Keyes beat Gary Bauer, Sen. Orrin Hatch of Utah and Sen. John McCain of Arizona. McCain is placing his early hopes in New Hampshire and did not campaign in Iowa.

Keyes said that the frequent debates among GOP rivals afforded him the chance to become better known. He used the nationally televised debates as a vehicle for his fiery rhetoric.

He had little campaign organization in Iowa, but his crowds had grown in the days leading up to Monday's caucuses.

Keyes scored well with Iowa Republicans concerned about abortion and moral values, according to interviews conducted at caucus sites. His support moved into the double digits, roughly doubling his showing in Iowa from four years ago when he came sixth in an eight-man field. He faded in New Hampshire in 1996 and his campaign never caught on.

During the 1996 Republican nomination battle, Keyes was shut out of some debates, leading him to threaten a hunger strike and to get briefly arrested when he tried to crash a forum in Atlanta.

This time around, he has the chance to make a splash as a battle-tested social conservative in the all-important New Hampshire primary.