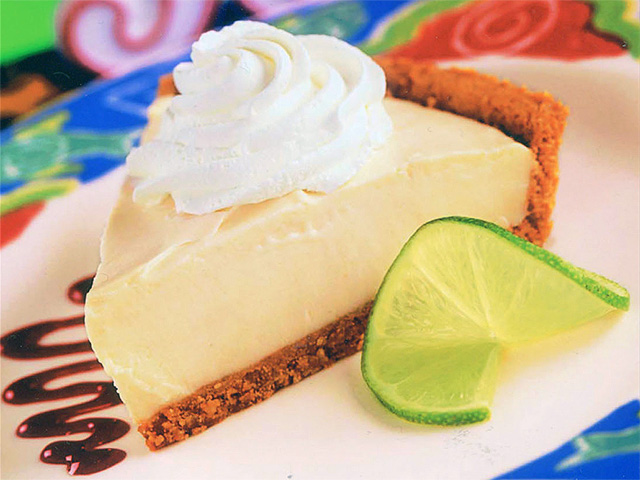 It's also the one "The Early Show on Saturday Morning" selected to feature in its "Taste of America" food festival when we found the best key lime pie in the country.

Naturally, we went to the Florida Keys for the area's famed dessert.

And Jim Brush, president of the Key West Key Lime Pie Co. filled viewers in on the best way to make key lime pie - and shared a recipe.

Jim started out selling pies with his girlfriend at a folding table on the side of the road. After they sold over 300 pies each of the first two weekends, they decided they needed to go into business making pies. Since then, they've been heralded as having the best key lime pie in America and have captured five blue ribbons from the American Pie Council's National Pie Championships.

Key lime pie was probably the only dessert actually created in the U.S., specifically, the Florida Keys. Think about it: Those who settled here years ago brought with them foods and desserts from their homelands. And key lime filling can be used for other items than just pies, such as canollis, tarts, cupped desserts, and cupcake toppings. You can also freeze it and make pie bars. It's a great topping for cakes. And my point of view is -- why ruin dessert by eating dinner first?!

The big secret to great key lime pie is getting the filling to the right thickness.

Using a wire whisk, combine condensed milk and non-dairy whipped topping. Slowly add in the juice, mixing while you add it in. The juice will cause a chemical reaction to take place and the mixture will thicken. You want to whip it to a thick consistency but not over mix, because that will break the chemical reaction. Place the mixture in the fridge while you prep the crust.

For the crust, combine graham cracker crumbs, brown sugar, and pinch of salt. Pour in the melted butter until the mixture is nice and firm and pat it down into an ungreased glass pie dish. Bake in the oven at 325 degrees Fahrenheit for 10 minutes. Let it cool for an hour.

Pour pie mixture into crust, level it with spatula and put in the freezer for one-and-a-half to two hours.