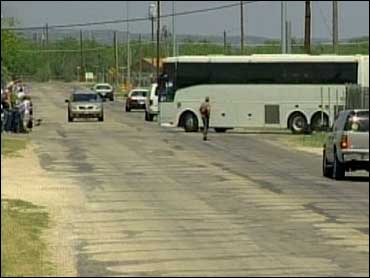 A 16-year-old girl is a key witness in the state's effort to pursue criminal charges against members of her polygamist sect, even though she denies investigators' claims that she was abused.

The girl, a daughter of the sect's jailed prophet, says she's never been married and doesn't have a baby. She denies church elders are influencing her and wants to fire her lawyer. The state can't even prove her alleged abuse happened in Texas.

A court filing shows that the girl has been subpoenaed to appear before a grand jury Wednesday, the day the panel convenes in Schleicher County, home of a west Texas ranch run by the Fundamentalist Church of Jesus Christ of Latter Day Saints.

It's unclear who else will testify. Grand jury proceedings are secret and the Attorney General's office, which is handling the prosecution, has declined to comment.

The criminal case follows state child welfare officials' ill-fated April seizure of more than 400 children at the Yearning For Zion Ranch in Eldorado.

The state accused the sect of widespread sexual abuse of teen girls, but the Texas Supreme Court forced the state to return the children from foster care in June. The high court said the state overreached in taking all the children from the ranch when only a handful of girls may have been abused.

Schleicher County Clerk Peggy Williams could not say what case the grand jury would be considering. But the sparsely populated county calls grand juries only about twice a year, and non-FLDS cases were handled several weeks ago.

It's not clear what, or whether, criminal indictments of FLDS members may result. But the girl scheduled to testify Wednesday illustrates that to win indictments, prosecutors may have to overcome the denials of the teens they allege were abused.

The girl is fighting attempts by her attorney, Natalie Malonis, to finalize an emergency restraining order issued Friday against church elder Willie Jessop. A hearing on that order was being held Tuesday afternoon.

Malonis said Jessop was influencing the teen and encouraging her to be uncooperative. The girl denies that, and denies her lawyer's central claim making her an abuse victim - that she was spiritually married at 15 to an adult man and had a child at 16.

The girl wants a new lawyer. "Natalie, quit all your lying about everything," she said in a letter to Malonis.

"I have asked her many times to please step aside," the girl told The Associated Press by telephone on Sunday from Texas. "I need more help. I want my attorney to listen to me."

Malonis has said she would not fight with her client through the media. She has said state investigators have given her the information that leads her to believe her client has been abused.

A call and e-mail to Jessop were not returned immediately. He and other leaders of the FLDS church have consistently denied there was any abuse and vowed earlier this month not to sanction underage marriages.

FLDS spokesman Rod Parker said he's not sure whether the girl will be cooperative in her grand jury testimony or whether other FLDS children have been subpoenaed to appear.

Under Texas law, a girl younger than 17 cannot generally consent to sex with an adult. Bigamy, which is generally considered a crime of fraud, is also illegal in Texas, although FLDS plural marriages were not sanctioned by the state.

Any criminal prosecution on sex charges is likely to be difficult. The state does have DNA material collected from most YFZ ranch residents to help them sort out family groups after the April 3 raid, and FLDS officials fear the evidence could be used against them in a criminal case.

"I thought from the beginning there was a secondary reason they wanted it," Parker said.

Texas Child Protective Services said it would turn over the DNA test results to criminal prosecutors if it were subpoeanaed by a grand jury or ordered by a court to do so.

Even if they had DNA evidence of abuse, prosecutors would have jurisdictional problems. Without the cooperation of the sect's teen girls, prosecutors will be unable to determine what state any alleged abuse occurred in. The sect has homes in Texas, Arizona and Utah and elsewhere.

The FLDS is a breakaway sect of the mainstream Mormon church, which renounced polygamy more than a century ago. Historically, church members lived along the Arizona-Utah line, where authorities had not sought criminal charges in decades until allegations of underage marriages - and willing witnesses - surfaced several years ago.

Still, just a handful of criminal cases have been prosecuted in the sect, estimated to have 6,000 members. Warren Jeffs, the girl's father and the leader who is revered as a prophet, was convicted in Utah of rape as an accomplice for his role in the marriage of a 14-year-old and her 19-year-old cousin. He is jailed awaiting trial on Arizona charges related to marriages involving young girls.

Texas authorities took DNA samples from him as part of an investigation involving girls at the ranch.