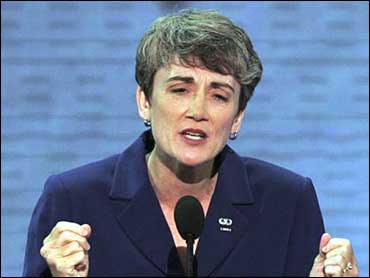 Breaking with the White House, the House Republican who chairs a panel that oversees the National Security Agency wants Congress to change a 1978 foreign intelligence law following the disclosure of President Bush's eavesdropping program.

Rep. Heather Wilson, R-N.M., chairwoman of the House Subcommittee on Technical and Tactical Intelligence, says the time has come for a "complete review" of the National Security Agency's program, spokesman Joel Hannahs said.

She believes she has a constitutional responsibility to oversee this program, and the House Intelligence Committee is entitled to full briefings, he said.

Hannahs also said that Wilson believes the 1978 Foreign Intelligence Surveillance Act needs to be updated to "take into account new technology." The law governs the monitoring of calls inside the United States for national security reasons.

The White House has insisted that it has the legal authority to monitor terror-related international communications in cases where one party to the call is in the United States.

Senior administration officials also say they were within the law when they chose to brief only Congress' so-called "Gang of Eight" — the leaders of the House and Senate and its intelligence committees.

While the Gang of Eight can be notified, Wilson believes "that is not oversight," Hannahs said.

Aboard Air Force One, White House spokesman Scott McClellan on Wednesday reiterated the administration's position that Congress has been briefed. He said the White House "will continue to listen" to ideas from Congress.

The House and Senate Intelligence Committees were scheduled to have closed-door briefings with Attorney General Gonzales and Gen. Michael Hayden, the No. 2 intelligence official, Wednesday afternoon and Thursday morning.

A spokesman for House Intelligence Committee Chairman Peter Hoesktra, R-Mich., said the briefing would cover legal aspects of the program.

Members of Congress have been anxious for operational details to better understand how the program works. Key details, such as how individuals are selected for the NSA's monitoring, remain a mystery.

No lawmaker that has been briefed on the program has called for its halt. But a number have questioned the Bush administration's legal rationale supporting the controversial eavesdropping and have argued that the administration could have used processes set up under the FISA law.

Fissures with the White House were highlighted Tuesday when a handful of the Senate Judiciary Committee's Republicans joined Democrats to raise doubts about the program's lawfulness at a daylong hearing with Attorney General Alberto Gonzales. Like Wilson, some Republicans suggested that the so-called FISA law should be revised.