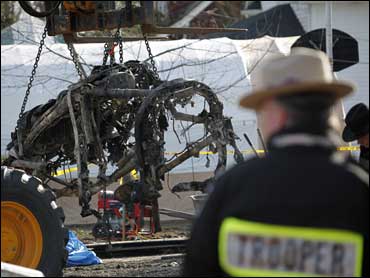 Investigators have located key components that might help reveal what the pilot did to try to save Flight 3407 during its final desperate seconds, when the plane plunged to the ground so suddenly that sending a mayday was impossible, an investigator said Monday.

After a seemingly routine flight, the airplane endured a 26-second plunge before smashing into a house in icy weather about six miles from Buffalo Niagara International Airport on Thursday night, killing 49 people on the plane and one on the ground.

Families of the victims visited the site Monday. They boarded several buses at the hotel where they are staying and drove to the crash site with police escort.

The families left roses in their memory, reports Glor.

National Transportation Safety Board member Steve Chealander said investigators have located the steering column, or yoke; all the propeller blades; five of six deicing valves; and rubber bladders designed to protect the tail from ice.

Though ice has emerged as a possible factor, the cause has remained elusive in part because there was no distress call from the pilot, no mechanical failure has been identified and the plane was so severely damaged.

The crew had turned on the plane's deicing system 11 minutes after leaving Newark, N.J. Shortly before the crash, they notified air traffic controllers that they were experiencing significant ice buildup.

Chealander said Sunday that the pilot appeared to ignore recommendations by the NTSB and his employer that the autopilot be turned off in icy conditions. The autopilot remained on until an automatic system warned that a stall could occur, pushed the yoke forward and shut the autopilot off.

Chealander acknowledged that it was possible that the pilot overreacted by yanking the yoke back, further destabilizing the plane, but he said that was one of an almost unlimited number of possibilities.

Kirk Koenig, president of Expert Aviation Consulting of Indianapolis and a commercial aviation pilot for 25 years, said the airplane may have been in a predicament that would challenge even the most experienced pilots.

For example, if ice were forming on the wings, the pilot would want to put the nose of the plane down and increase power; if the icing were on the tail, the opposite would have been required, pulling the nose up and reducing power.

"Things happened so quickly and they were so low to the ground that it would not have mattered if Chuck Yeager and Neil Armstrong were flying the plane; there wouldn't have been a different outcome," Koenig said.

Chealander agreed, saying the pilots had their hands full and had no time to send a distress signal.

"They were trying to save their lives and the lives of everybody on that airplane," Chealander said.

The plane's deicing system was apparently working, the NTSB has said. That system includes strips of rubber-like material on the wings and tail that expand to break up ice, then contract and expand again to break up new ice.

The victims' relatives that visited the scene Monday left red roses dangling from temporary fencing and in a semicircle on the ground.

The site of the house on a quiet, tree-lined street in a middle-class neighborhood is now an almost empty dirty lot. All that is left are a garage with a scorched door, a basketball hoop, four steps leading to nowhere, a mailbox - the numbers 6038 on its side - and the plane's enormous tail.

The two closest homes, each no more than two feet from the lot, appear almost untouched.

More than 2,000 people, including relatives of the victims, turned out for a community prayer service Monday.

"We feel it's a miracle that more houses weren't destroyed and more people killed," said Ora Ganschow, 79, who lives four blocks from the crash site.

Wearing blue dress uniforms, members of the Clarence Center Volunteer Fire Co. carried single long-stemmed roses - one for each victim - to the altar, placing them into a crystal vase as a soloist sang "Amazing Grace."

Chealander said a preliminary analysis of the engines was "consistent with high powered flight," a sign that they were operating properly at the time of the crash.

The captain, Marvin Renslow, 47, of Tampa, Fla., was believed to be handling the duties of the pilot during the final moments aboard the Dash 8 Q400 plane, operated by Colgan Air. He had 3,379 hours of flying experience but had only flown the Dash 8 since December.

Chealander said investigators would research Renslow's and Shaw's histories, including what they did for 72 hours before the flight; would analyze the plane's maintenance records; and were asking pilots who were in the air around Buffalo on Thursday whether they encountered ice.

Investigators have learned that the plane's ice-detection system was the subject of a maintenance inquiry several flights before the crash. Chealander said the system was rechecked and certified as operable and was operating on the flight to Buffalo.

He also noted that the pilot of the same model of plane that flew from Newark to Buffalo and arrived safely 27 minutes after the crash had reported moderate icing. Another pilot flying well south of Buffalo reported severe ice, Chealander said.