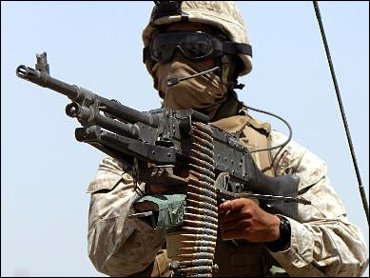 Riyadh al-Nouri, al-Sadr's brother-in-law, offered no resistance when American troops raided his home during a series of clashes in this Shiite holy city, according to Azhar al-Kinani, a staffer in al-Sadr's office in Najaf.

The capture of al-Nouri would be a major blow to al-Sadr's al-Mahdi Army, which has been battling coalition forces since early April. Al-Sadr launched his uprising in response to a crackdown by coalition authorities.

During the clashes overnight, militants fired rocket propelled grenades and mortars during three hours of skirmishes that ended about dawn, residents said.

Fighting around some of the holiest cities of Shia Islam has angered many Shiites in Iraq and elsewhere and has led to calls for both the Americans and the militiamen to pull back from the shrines.

On Tuesday, the Imam Ali shrine in Najaf received slight damage. Both U.S. and Shiite forces blamed the other for the damage.