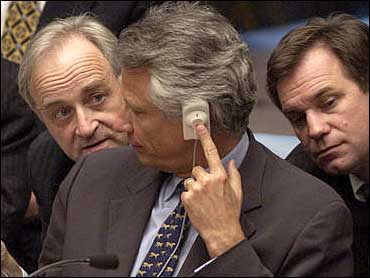 France proposed strengthening weapons inspections in Iraq, including tripling the number of inspectors and placing a full-time monitor in Baghdad to oversee the process, after hearing Secretary of State Colin Powell's presentation Wednesday on Iraq's failure to disarm.

"The use of force can only be a final recourse," French foreign minister Dominique de Villepin said. "We must move on to a new stage and further strengthen the inspections."

De Villepin said France would carefully review the evidence provided by Powell, but that inspections were working and had resulted in major achievements.

Still, he acknowledged there was more Iraq could do to cooperate with a beefed up inspections regime to avert war.

"Given the choice between military intervention and an inspections regime which is inadequate because of a failure to operate on Iraq's part, we must choose the decisive reinforcement of the means of inspection. This is today what France is proposing," he said.

France has been the leading opponent of using military force in Iraq now and has suggested it could veto a resolution which could lead to war.

De Villepin said the council should work with the chief inspectors to find ways to strengthen their mission.

"Let us double, let us triple the number of inspectors. Let us open more regional offices. Let us go further than this, could we not, for example, put up, set up, a specialized body to keep under surveillance the sites and areas that have already been inspected? Let us very significantly reinforce the capacity for monitoring and collecting information in Iraq," he said.

De Villepin and other foreign ministers spoke from remarks prepared before Powell's presentation.

CBS News Correspondent Elaine Cobbe reports French intelligence sources say there was nothing very compelling about Powell's presentation. And they dismissed his attempts to link Saddam to al Qaeda as old news, adding that it's been known for a long time that bin Laden has links to northeastern Iraq. That part of the country is in the hands of Kurdish rebels and Saddam has no power there.

Powell, making his case that Iraq had defied all demands that it disarm, presented tape recordings, satellite photos and statements from informants that he said constituted "irrefutable and undeniable" evidence that Saddam is concealing weapons of mass destruction.

Three months after Iraq pledged it would disarm, Powell presented his evidence in an appearance televised live around the world. The Council members — joined by Iraq's U.N. ambassador — sat around a large circular table with Powell and listened attentively.

Of the 15 Council members, only the United States and Britain have voiced support for forcibly disarming Saddam. But Bulgaria and Spain are considered likely members of a coalition should the United States go to war.

"I think the case was overwhelming for sSddam's disarmament, peacefully if Saddam so chooses or through military action if he doesn't," said Israeli Foreign Minister Benjamin Netanyahu.

By sending Powell to the U.N., the White House wanted to demonstrate that it is consulting with the world body before taking military action against Iraq, reports CBS News Correspondent Mark Knoller.

"The information provided today by the U.S. secretary of state once again convincingly indicates the fact that the activities of the international inspectors in Iraq must be continued," Russian Foreign Minister Igor Ivanov said. "They alone can provide an answer to the question of to what extent is Iraq complying with the demands of the Security Council."

China, a powerful Security Council member, also came out in support of continued inspections and said it was ready to make all efforts to avert war.

"It is the universal desire of the international community to see a political settlement to the issue of Iraq and avoid any war," Chinese Foreign Minister Tang Jiaxuan said in a prepared statement he read to the council.

"As long as there still is the slightest hope for a political settlement, we must exert out utmost effort to achieve that. China is ready to join others in working towards this direction," Tang said.

Jack Straw of Britain, America's closest ally, stood firmly behind the United States. Saddam Hussein "must be left in no doubt as to the serious situation he now faces. Time is now very short. If noncooperation continues, this council must meet its responsibilities," the British foreign secretary said.

Cameroon called for continued inspections and suggested that Secretary-General Kofi Annan visit Baghdad in order to help find a peaceful solution to the crisis.

Turkey moved a step closer to preparing its military bases for use by U.S. troops in Iraq and one arab analyst told Roth, "We're heading toward war whether there's evidence or not."

But in Saudi Arabia, the government said it was urging the security council to consider an alternative -- perhaps including an amnesty for Saddam's top generals, to induce them to stage a coup. If that's a doubtful plea for peace, another came from inside Iraq.

Iraq's Deputy Prime Minister Tariq Zziz asked for an audience with the Pope; and the Vatican said he can have one -- next week.