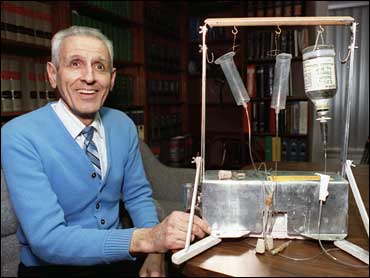 Some relatives of people who died with Dr. Jack Kevorkian's help say his release from prison stirs up grief over the deaths of their loved ones. Others are grateful for the services the retired pathologist offered to family members.

Kevorkian, 79, was convicted of second-degree murder in the death of a man with Lou Gehrig's disease. He is scheduled to walk out of a southern Michigan prison Friday after serving just over eight years of a 10- to 25-year sentence. He got a year and nine months off his sentence for good behavior.

"It's like the wound that was starting to heal has been cut open again," said Tina Allerellie, whose sister turned to Kevorkian in August 1997 after suffering for years with multiple sclerosis.

"We all thought that, even if she did contact him, there was no way that he would do what he did," she said. "We were all very, very wrong."

Other family members whose loved ones died with Kevorkian's help insist he should be admired.

Terry Youk, for example, was grateful when Kevorkian helped his brother end his life in 1998 and never thought he deserved a prison sentence for administering the fatal drugs.

"It was a medical service that was requested and, from my point of view, compassionately provided by Jack," he said. "It should not be a crime."

Allerellie, who lives in Elora, Ontario, about 70 miles east of Toronto, became active in Canada's anti-euthanasia movement after the death of her sister, Karen Shoffstall, who lived in Long Beach, N.Y.

Shoffstall's ex-husband, Ed, said at the time of her death that she had lost feeling in her body below the waist and could not tolerate the steroids that might have provided some pain relief.

But Allerellie doubts that her 34-year-old sister really wanted to die.

"My mother and I spoke personally to the coroner who performed the autopsy on my sister, and he said that she could have lived, in his exact words, 'Another 20, 30, 40, even 50 years.' Her thing was depression. Her thing was fear of an uncertain future," Allerellie said.

Shoffstall talked about going to see Kevorkian so often that her friends began answering the phone, "Yeah, Jack Kevorkian here," she added.

But no one really thought Shoffstall would meet Kevorkian at a hotel in the Detroit suburb of Farmington Hills, where her body was found with a typewritten note saying Kevorkian and an associate were involved.

The medical examiner said Shoffstall did not administer the drugs herself. She was one of at least 130 people Kevorkian said he helped die from 1990 to 1998. Many who sought his assistance were not terminally ill.

"His intent, I believe, has always been to gain notoriety," Allerellie added. "I'm sure if I was to say to him the name 'Karen Shoffstall,' he wouldn't have a clue who I'm talking about."

For Youk, his brother's death intensified his belief that more states need to have assisted-suicide laws. Oregon is the only state in the nation in which a terminally ill patient with six months or less to live can legally ask a doctor to prescribe a lethal amount of medication.

Since his brother's death, Youk, a filmmaker in Montpelier, Vt., has trained to be a hospice volunteer and made several films about end-of-life care, including one used to train hospice workers.

By the time Thomas Youk met with Kevorkian, he was nearly immobilized by Lou Gehrig's disease, or ALS. He could move only the thumb and forefinger on his right hand and often choked on his own saliva.

"He was kind of in the midst of a lot of fear, and feeling like he had lost a lot of meaning and dignity in his life," Youk said of his 52-year-old brother, who lived in Oakland County near Detroit. "He was difficult to understand, but ALS doesn't affect your cognitive abilities. He was very clear about what he wanted to do."

Kevorkian met with Terry and Thomas Youk and with Thomas' wife. He looked over Youk's medical records and tried to talk Youk out of going ahead. Everyone agreed to put off any decision for a couple more weeks.

But within days, Thomas Youk again awakened in the middle of the night choking on his own saliva and unable to breathe.

"He very clearly said he wanted to move the process along," said Terry Youk, who again contacted Kevorkian.

Thomas Youk could not administer the shots he needed to die, so Kevorkian gave him the injections and videotaped the entire process.

Kevorkian then gave the tape to CBS' "60 Minutes" and challenged authorities to prosecute him. Oakland County Prosecutor David Gorcyca had declined to go after Kevorkian for a series of earlier assisted suicides, but he could not let this one pass.

"He got out on national spotlight and videotaped for the world to see an act that didn't involve assisted suicide but euthanasia," Gorcyca said. "He didn't think any jury would convict him of any crime."