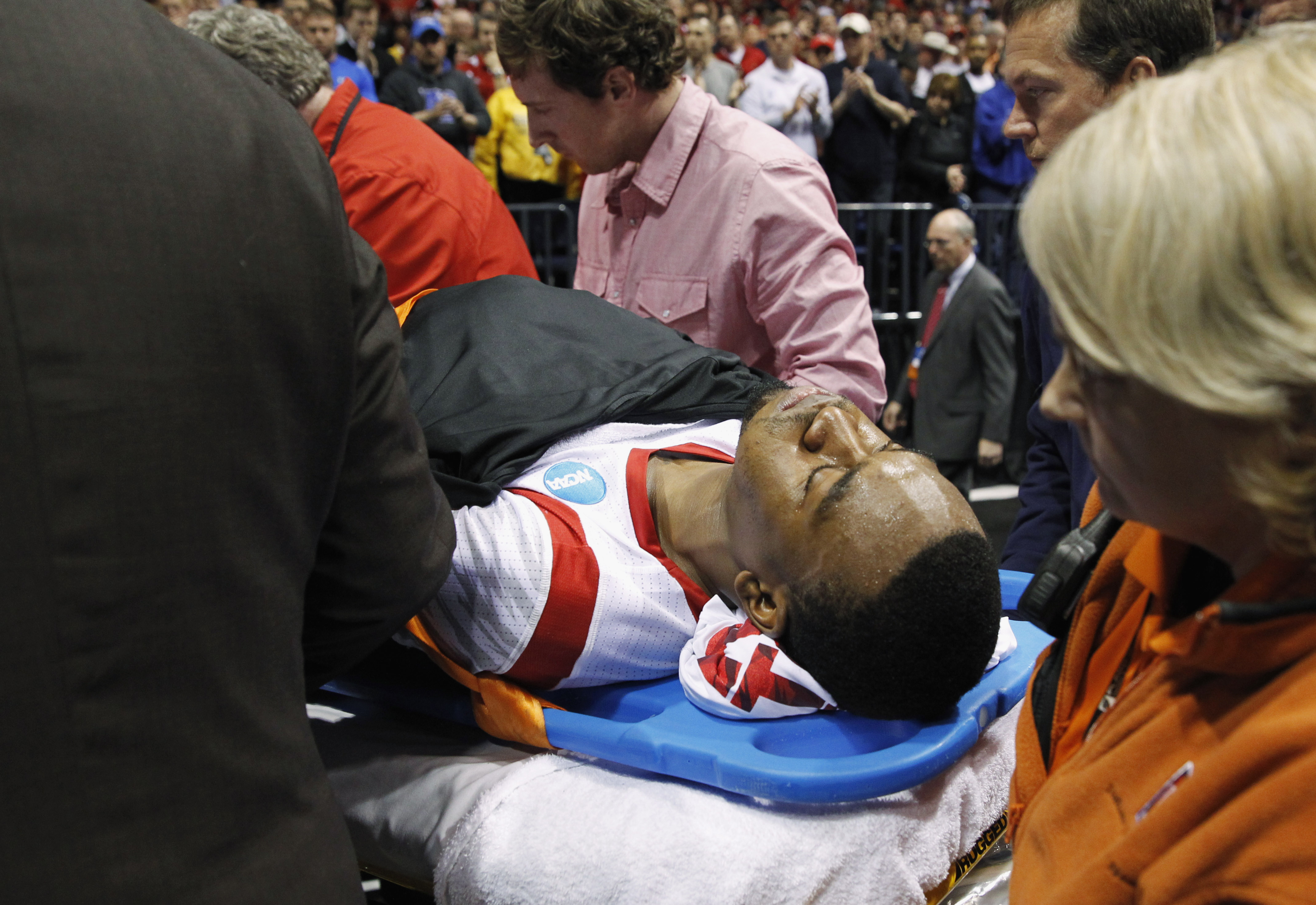 A look at the leg injury to Kevin Ware, a sophomore guard for Louisville's basketball team:

Ware broke his lower right leg in two places as he contested a 3-point shot during Louisville's victory over Duke in the Midwest Regional final on Sunday. Ware jumped to try and block the shot and his leg bent at practically a right angle when he landed, the bone coming through his skin. The frightening break was captured on national television; the game was one of two Sunday with a berth in the Final Four at stake.

CBS showed two slow-motion replays of the injury right after it happened then not again, concentrating on the reaction of people around him. The segment was not replayed during CBS' halftime coverage. CBS Sports Chairman Sean McManus said that was because of the graphic nature of the footage

He left the court on a stretcher and taken to Methodist Hospital where he had successful surgery Sunday night. School officials said the leg, broken in two places, was reset and a rod inserted into his right tibia. Ware is expected to stay in Indianapolis until at least Tuesday. Louisville trainer Fred Hina said Ware needed surgery immediately because of the risk for infection with an open fracture.

"He was groggy, in good spirits. He saw us win the trophy and was crying and said it was all worthwhile," coach Rick Pitino told The Associated Press. "We didn't cut down the net, but I left him the trophy."

Pitino said he and his son Richard, who recruited Ware, and an equipment manager would spend the night in Indy, along with the team's doctors.

Dr. Reed Estes, assistant professor of orthopedic surgery at the University of Alabama at Birmingham, and physician for the UAB football team, said surgery to stabilize the bones in such cases is usually successful and Ware should return next season. Louisville coach Rick Pitino said the injury was the same one sustained by former Louisville running back Michael Bush, who has returned to have a productive NFL career with Oakland and Chicago.

Dr. Frederick Azar, head of the Campbell Clinic in Memphis, Tenn., and a spokesman for the American Academy of Orthopaedic Surgeons, said Ware "jumped pretty far horizontally and vertically, and he landed with a twist," which puts so much torsion and stress on the bones they could have just snapped. He agreed with Estes' assessment that a stress fracture could have made Ware more prone to such an injury.

After the grisly injury to Ware, the outcome of Louisville-Duke took a significant back seat on social networks to thoughts about Ware and reaction to the play. On Twitter and Reddit, the reaction was swift, wide reaching and prolonged. Twitter hashtags "PrayforWare" and "KevinWare" were still trending worldwide nearly three hours after the play, well after Louisville won the game and secured a Final Four appearance. On Reddit, one of a handful of posts about the play hit the popular site's front page.

Sentiments for Ware came from all over the sports and entertainment world. Simultaneously, everyday fans compared the incident with other famous sports injuries and traded less-gruesome ways to share the news, including pictures and video of emotional reactions from players and coaches. Joe Theismann, the former Washington Redskins quarterback, immediately reminded Twitter users of the 1985 injury on Monday Night Football that ended his career. "Watching Duke/ Louisville my heart goes out to Kevin Ware," Theismann tweeted.