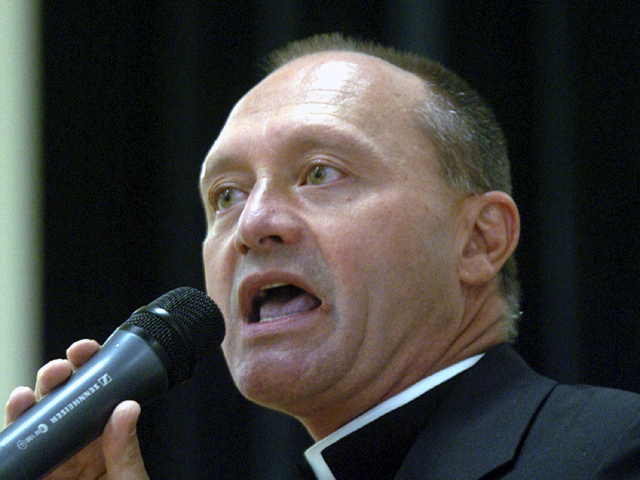 (AP) HARTFORD, Conn. - Suspended Roman Catholic priest Kevin Wallin pleaded guilty Tuesday to allegations that he made more than $300,000 in methamphetamine sales out of his Connecticut apartment, while also running an adult video and sex toy shop.

Wallin, 61, admitted to conspiracy to possess with intent to distribute methamphetamine and was scheduled to be sentenced on June 25. The prosecution and defense agreed on a sentence of 11 to 14 years in prison.

Prosecutors said Wallin had meth mailed to him from co-conspirators in California and sold the drugs out of his Waterbury apartment last year. He also bought an adult video and sex toy shop in North Haven named Land of Oz & Dorothy's Place, apparently to launder the drug money, authorities said.

Wallin, a former pastor at St. Augustine Parish in Bridgeport, acknowledged in court that the drug operation involved nearly four pounds of methamphetamine. He said "yes" several times as the judge asked whether he understood the consequences of his plea.

Charges against four other people arrested in the case are pending.

"We're glad to have resolved this part of the case," Connecticut U.S. Attorney David B. Fein said outside the courtroom. "It's a serious conspiracy charge involving a very dangerous drug."

Dubbed in some media as "Monsignor Meth," Wallin was pastor of St. Augustine Parish for nine years until he resigned in June 2011, citing health and personal reasons. He previously served six years as pastor of St. Peter's Church in Danbury until 2002.

"Msgr. Wallin's guilty plea represents an important step in his coming to terms with his own actions and their impact on others," the Diocese of Bridgeport said in a statement. "It is a difficult moment for all of us but we hope it is also the first step in rebuilding his life. We pray that he moves toward healing and wholeness."

The diocese suspended him from public ministry in May 2012 amid concerns by church officials about a number of problems with Wallin, including sexually inappropriate behavior with other men in the church rectory, diocese spokesman Brian D. Wallace said. Church leaders weren't aware of Wallin's involvement with drugs at the time of the suspension.

Wallace said Wallin now faces the prospect of removal from the priesthood by the Vatican, a process called laicization.

Wallin was arrested in January, and a grand jury indicted him and four other people on drug charges.

Federal agents said they learned about other sales Wallin was making through wiretaps and informants.

Also charged in the case were Kenneth Devries, Michael Nelson, Chad McCluskey and Kristen Laschober. Authorities say McCluskey and Laschober were involved in the shipping of methamphetamine to Wallin.