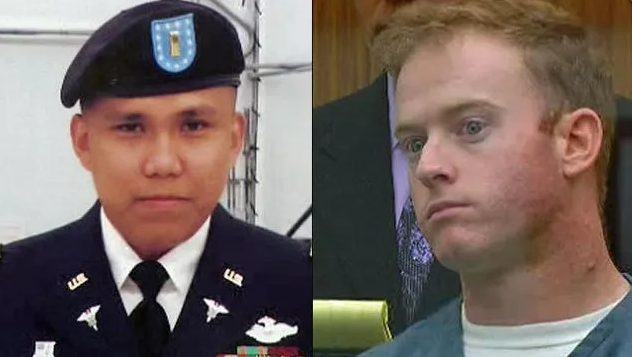 VISTA, Calif. -- After the prosecutor's opening statement, a former Marine changed his plea and acknowledged killing an Army reservist in a California motel in 2012 -- a brutal attack in which the victim was stabbed 44 times and shot twice. The Union-Tribune reported that defendant Kevin Coset, who represented himself in court, agreed Tuesday to plead guilty to murder and allegations that he used a gun and a knife to kill Alvin Bulaoro.

Prosecutors agreed to drop a special circumstance allegation, which could have sent Coset to prison for life without parole. The 27-year-old faces up to 51 years to life in prison when he is sentenced April 20.

CBS News affiliate KFMB-TV reports Bulaoro served as a second lieutenant in the U.S. Army Reserve. The 24-year-old went missing Dec. 21, 2012. Nearly two weeks later, his body was discovered inside a sleeping bag in the backseat of his car outside a grocery store in Fallbrook, which is about 54 miles north of San Diego.

Prosecutors said messages between Coset and Bulaoro indicated they had a sexual relationship.

Detectives learned through cellphone records that Bulaoro had planned to meet up with someone the day he went missing, according to court documents. Investigators traced the texts to a pre-paid cellphone. Surveillance video captured a man buying the phone, but he used cash.

Weeks later, detectives learned the sleeping bag was a style sold on base at Camp Pendleton, which is only a few miles away, and found that someone had used a credit card to purchase one on base in the hours before Bulaoro disappeared.

The same card was used later that day to pay for a Fallbrook motel room. It had an additional $100 charge for damages including a missing comforter and a large pool of blood. No one at the motel called authorities to report it.

Though the room had been cleaned in the weeks since the attack, detectives found Bulaoro's blood under the carpet and on the padding. It was also on the walls, ceiling and furniture, according to court documents.

Authorities arrested Coset outside his barracks in February 2013.

Coset had previously been deemed mentally incompetent to stand trial. Proceedings were delayed while he was in a state hospital. He was later found to be competent and -- following a psychiatric evaluation -- he was granted permission to represent himself.