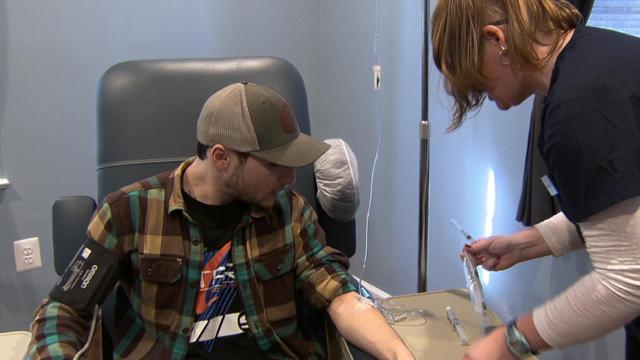 Anne Stallings says she has been battling severe depression for most of her life. She tried anti-depressants and even electroconvulsive therapy, but nothing worked until she went to a Potomac, Maryland, clinic and tried ketamine, reports CBS News correspondent Paula Reid.

"It was like the fifth treatment in and I had come home from the grocery store and I was putting away the groceries and I was like, 'Wow, this is how you don't feel depressed.' It was like from turning on a black and white TV to a color TV," Stallings said.

Ketamine was approved by the FDA in the 1970s to sedate patients during medical procedures. It is more commonly known as an animal tranquilizer and in powder form as "Special K," a club drug used to get high.

Today, ketamine is being provided legally off-label to treat depression at an estimated 250 clinics across the U.S.

Dr. Steve Levine offers intravenous ketamine infusions at several clinics around the country as an alternative to common anti-depressants. He says he treats about 70-80 patients across all the offices on any given day.

"Everything for the past 50 years has been based on the chemical imbalance theory of depression which has never held water," Levine said. "So all these medicines, while they do help a lot of people, are based upon a flawed theory. And that is probably one of the reasons why they do take so long to work. They all take weeks to months to work so here is a medicine that people can take infrequently that is based upon a theory of the brain that makes a lot more sense and it works almost immediately."

Stallings didn't have time to wait. She had an especially hard time over the holidays and when her father got sick, she thought about taking her own life.

"I actually had suicidal ideations and the one thing about ketamine was that I was able to get in here emergently because I knew what was going on and when I left here my suicidal thoughts were gone," Stallings said.

That is in line with what Columbia University discovered in one of the largest studies yet on ketamine. Researchers found the drug was significantly more effective than a commonly used sedative in reducing suicidal thoughts in depressed patients. The effects lasted up to six weeks.

Twenty-two-year-old Marc Nelson ditched his antidepressants for ketamine and talk therapy. He says he now feels more like himself, but it came at a cost. He has spent more than $10,000 on treatments.

"So many different drugs that I am now off of all of them, which you know, the side effects were just not tolerable to me. They make me a zombie. I was not happy," Nelson said.

But these infusions can have their own pitfalls. Ketamine can cause people to feel detached from their bodies.

"The 45-minute period of very floatiness, I sometimes get nauseous," Nelson said. "It's a very interesting process. ... I just lost my train of thought."

Once the treatment was finished, Nelson said he felt "clear, cognizant" and "definitely able to pronounce" his words again.

Asked to address critics who say he's making money by giving people the opportunity to get high, Levine said, "I would say that if you ask any of our patients none of them feel that they are getting high."

"People tend to focus on the party use of ketamine, because it is more exciting, it's sexier in some way. It does it a disservice because that's a very small fraction of its use," Levine added. "And as far as the money making aspect of this, if you were doing things in the right way you're not gonna make a lot of money."

Ketamine has piqued the interest of some major pharmaceutical companies. There are half a dozen drugs in development that mimic the way ketamine works, with some undergoing FDA clinical trials for approval as antidepressants.

For decades, Dr. Gerry Sanacora has been studying ketamine at Yale.

"What we're trying to understand is what does it change in the brain that allows that sustained anti-depressant like response?" Sanacora said.

He says the drug is not addictive in the way opioids are, but could still be harmful in the long run.

"There is at least evidence in animal models that these type of medications can actually cause some structural damage in the brain. That's usually at higher doses, that's usually at longer term exposure but we don't know where that level is," Sanacora said.

"In our population even people who have been having ketamine on a maintenance basis for up to six years now we haven't seen any sign of that," Levine said.

But for Anne Stallings, despite the unknowns, she's content with a chance to feel normal.

"If I can live a quality, happy life, and be productive, be able to go to work, to be able to have my family, to enjoy life – not walk through life but enjoy life – then it's worth it."

Behind the first all-electric truck company
Thanks for reading CBS NEWS.
Create your free account or log in
for more features.
View CBS News In
CBS News App Open
Chrome Safari Continue
Be the first to know
Get browser notifications for breaking news, live events, and exclusive reporting.