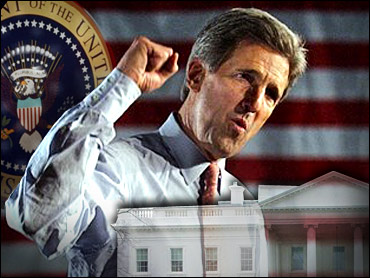 
When you've doused the Howard Dean fire, made mincemeat of Dick Gephardt, Wes Clark, and Joe Lieberman, and whopped handsome John Edwards week after week, you've earned the honor of having parlor politicians pontificate on whom you should pick for vice president. I intend to pay homage to John Kerry in this traditional manner.

Most election numbers-crunchers expect the basic dynamics of the electoral vote map this year to be very similar to 2000. There is no sign yet the country isn't just as closely divided as it was four years ago. President Bush did break an iron law of modern election cycles by leading his party to congressional gains in the 2002 elections. Still, it appears that the states that were close in 2000 will be close in 2004.

If you buy that, the big targets for the Democratic nominee are Florida, of course, and Ohio, a state with 20 electoral votes that Gore lost by just 3.5 percentage points. Unfortunately, for the Democrats, Ohio is currently devoid of Democratic stars and Florida is not much better off. The other hot spots from Bush's 2000 column are Tennessee, New Hampshire and Missouri.

The states Democrats will have to guard most carefully from Republican poaching are New Mexico, Iowa, Pennsylvania, Michigan and Wisconsin.

So the map points more to a Rust Belt guy than a Sun Belt dude. But the map – I know, I know – is just one factor, an old-fashioned one at that.

So Kerry can come at this decision from many angles. A rough draft of a first-cut list would look something like this:

John Edwards: You've heard all the arguments for this Dream Team, so I won't bore you. I'll just briefly add two pros and two cons.

Pro: Edwards seems to do very well with women and quite respectably in the Midwest.

Con: Despite his humble origins, he too is a zillionaire who lives in a mansion one block from the Kerry-Heinz Georgetown manse.

And I would also proffer this passage from the Feb. 12 Boston Globe, Kerry's hometown paper: "Several Kerry advisers say the Massachusetts senator is skeptical about Edwards's strength as a running mate, saying he appears to lack the clout with Southern voters that he often brags about being able to deliver… Kerry is also said to be unconvinced that Edwards is experienced enough to step in as a wartime president should something happen to him. National security credentials are the most important assets that the Democratic presidential front-runner would use to choose a running mate, these aides said." Several other stories have since alleged that John K. doesn't like John E.

Wesley Clark: He looks good on paper as a VP, just like he did last summer as a P. But the four-star resume didn't get him many votes, what's to say it would do any better in the big game?

Dick Gephardt: Missouri is an important state and so is neighboring Iowa – oops, Gephardt got creamed in Iowa. Still, there aren't that many Democrats with high national name recognition who you can dress up and take to a debate. Gephardt is that.

Gov. Bill Richardson, New Mexico: Would help in super tight New Mexico with its five whole electoral votes. He would theoretically help nationally with the Hispanic vote, not a traditional source of weakness for Democrats. He does have national security credentials. But I don't think the focus group gang would let him go further than the "mentioned" list.

Bob Graham One word: Florida. One phrase: Against the war from the start. He's a huge vote-getter in Florida with expertise on intelligence issues. His presidential campaign was perceived, sorry to say, as a joke. I think you can make a strong argument that Graham is an excellent choice.

Former Sen. Sam Nunn, Georgia: Nunn has all the tickets except he's a bore as a campaigner. He's the most hawkish Democrat around and a credible critic of the war. He has the gravitas Kerry is said to want and which voters seem to want too. He's a Southerner if you think that's a virtue. Party advocates for women's and gay issues might go bats—t over Nunn though; not "might" - they would, actually. Maybe that helps. Nunn also has a history of flirting and then saying thanks, but no thanks.

Sen. Evan Bayh, Indiana: Young, handsome, fresh – he's a former governor who has been through several campaigns. He's a Midwestern John Edwards, who hasn't played the big houses yet. Does he help in neighboring Ohio – or Michigan, Missouri or Tennessee? Does he look good in a debate with Cheney? Some Democrats would like to see a young comer on the ticket, just in case things don't work out this year and there aren't many.

Gov. Tom Vilsack, Iowa: He's more widely known than most governors because of the caucuses, but this is not a household name. Iowa's an important state but it has only seven electoral votes. There's no "wartime" heft with Vilsack and no clear image statement either.

Hillary Clinton: What could be more fun?

Bill Bradley: This would be sort of like Bob Dole picking Jack Kemp in '96, which didn't work out real well. But there just aren't many Democrats that a bunch of guys at a Cleveland Indians game could all name quickly, and Bradley is one of them.

Ted Kennedy: Sort of like Clinton-Gore, you hit the enemy with a blatant double-whammy. I think it's a gutsy, 'I am who I am, Bub' kind of move. And Kerry without Kennedy is like Abbott without Costello, Andy without Barney, Jerry without George. Until Kennedy gave Kerry his staff and hit the stump with him, he was floundering. Of course, Kennedy would have to move because the Constitution doesn't allow the president and the vice president to come from the same state. Rats. He's not really on any lists.

A few other names will pop up in articles here and there, especially in hometown papers. Two women governors from the West are favorites: Janet Napolitano of Arizona and Kathy Sebelius of Kansas. Gov. Mark Warner of Virginia will probably be high on the list, in four or eight years. The importance of Florida puts Sen. Bill Nelson on some lists and Pennsylvania Gov. Ed Rendell's name comes up occasionally.

Another former senator from Georgia, Max Cleland, has been mentioned. So has Robert Rubin, Clinton's Treasury Secretary. Joe Biden and Kerry's own campaign chairman and former New Hampshire Governor, Jeanne Shaheen will get mentioned eventually. Same with Bob Kerrey, who faces a severe double-name problem. And Senate Minority Leader Tom Daschle's name is bound to pop up at some point.

And if there is a god of political fun, the actual nominee isn't on this list.