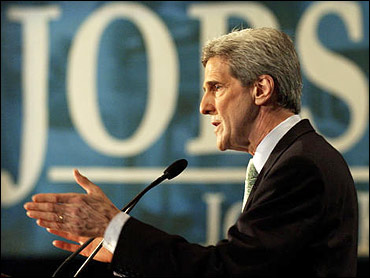 Determined to counter President Bush's effort to portray him as a tax-raiser, Democrat John Kerry said Friday he would lower corporate taxes by 5 percent to promote job creation while eliminating tax incentives that sends work overseas.

"Some may be surprised to hear a Democrat calling for lower corporate tax rates," Kerry told an audience at Wayne State University. "The fact is, I don't care about the old debates. I care about getting the job done and creating jobs here in the United States of America."

Kerry, speaking to Michigan voters who have seen unemployment spike during Mr. Bush's tenure, promised to create 10 million jobs in his first term. He said the first step would be eliminating rewards for companies that move overseas, calling it "the most sweeping tax law reform in forty years."

His goal is to have 5.5 million minority homeowners in the country by the end of the decade.

Touting his tax cuts as the economy's savior – and pointing to the strong housing market as proof – Mr. Bush said "more people own their own home now than ever." More than 50 percent of minorities owned their own homes in the last three months of 2003 for the first time ever, the president said.

Nationally, more than 75 percent of white Americans owned their own home in last year's fourth quarter.

In Detroit, Kerry said he would challenge a reluctant Congress and special interests to carry out the changes in international corporate tax law. The presumptive Democratic nominee, in making his overture to the business community, overrode the objections of some advisers who opposed the corporate tax cut on political grounds.

The plan would face a series of obstacles should the four-term Massachusetts senator defeat Mr. Bush in November, starting with politically powerful corporations that benefit from the overseas tax breaks he wants to scrap.

Kerry also may be second-guessed by Democrats who would prefer to transfer his plan's savings to more targeted job initiatives or programs that benefit middle-class voters.

Kerry settled on a blend of loophole-cutting populism and business-friendly moderation, casting his package as jobs-producing tax reform. Polls show jobs are the top issue with most voters, and Kerry is viewed as best suited to improve the economy. Terrorism is the No. 2 issue, and most voters say they trust Mr. Bush most to protect the nation.

Though the economy has shown signs of strengthening, more than 2.2 million jobs have been lost since Mr. Bush took office.

White House spokesman Scott McClellan dismissed Kerry's proposal as a "tax shell game" that he said would not address the issue of jobs going overseas.

"This is nothing but a reshuffling of the tax code and a political shell game and can't erase the fact that John Kerry's record is one of raising taxes some 350 times," McClellan said.

The initiative, which Kerry said will pay for itself, is part of his overall economic plan to lower the cost of health care and energy, increase investment in education and reduce the federal deficit. Kerry has not fleshed out the cost or other details of his overall spending, but the Bush campaign has made a series of assumptions to conclude he would need to raise taxes by at least $900 billion, a charge the Kerry campaign disputed.

Kerry unveiled the first plank of his economic package in Michigan, a politically important state where 6.6 percent of workers are unemployed. Many of the jobs moved abroad.

"If a company is torn between creating jobs here or overseas, we now have a tax code that tells you go overseas," Kerry said. "And that makes no sense. And if I am president, it will end as soon as possible."

Current tax laws allow American companies to defer paying taxes on income earned by their foreign subsidiaries until they bring it back to the United States. If they keep the money abroad, they avoid paying U.S. taxes entirely.

Kerry would require companies to pay taxes on their international income as they earn it rather than being allowed to defer it. The new system would apply to profits earned in future years only, not retroactively.

He also would allow companies to defer taxes when they located a business in a foreign country that serves that nation's markets. A U.S. company seeking the tax break could open a car factory in India to sell cars in India, for example, but could not relocate abroad to sell cars back to the United States or Canada.

Kerry's campaign estimates that the change would save $12 billion a year. The savings would be used to reduce the corporate tax rate from 35 percent to 33.25 percent. That amounts to a 5 percent reduction in the rate.

More than 99 percent of companies paying corporate taxes would see their tax bills lowered, the campaign says. But the 1 percent paying higher taxes are some of the nation's biggest and most powerful.

"I know how tough their lobbying will be and so do my colleagues in Congress," Kerry said. "But I believe that's why we have elections in America — so that the people can set us on a new course."

Advisers inside and outside the campaign debated whether to use the $12 billion to cut corporate taxes or target it elsewhere. Some wanted a robust tax credit for employers who create jobs. Kerry opted for a scaled-down version of that initiative.