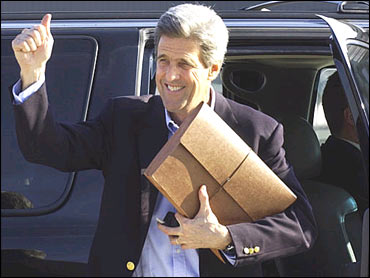 In Los Angeles, supermarket tycoon Ron Burkle is opening his home for a planned $1 million fund-raiser March 30 that is expected to draw big donors from Hollywood, real estate, banking and labor. Another Los Angeles fund-raiser is possible in April.

Streisand has already donated $2,000 to Kerry and is in discussions about what else the singer and actress can do to best help his campaign, a spokeswoman said.

DreamWorks SKG film and record company executive Jeffrey Katzenberg is a co-host of the March 30 event. His DreamWorks partners — Steven Spielberg and David Geffen — haven't committed to raising money for Kerry, but expect to meet with the Massachusetts senator soon to discuss their involvement, DreamWorks spokesman Andy Spahn said.

Kerry faces long odds in trying to narrow the gap against the Bush campaign, which reported cash on hand of $104 million as of Feb. 1 — with no debt — and the president continued to raise money in California Thursday.

In its most recent public report, the Kerry campaign said it had $2.1 million cash on hand as of Feb. 1, with debts of $7.2 million. Fund raising has improved, and Kerry's aides said he brought in a record $1.2 million over the Internet in less than 24 hours after locking up the Democratic nomination Tuesday. Like former rival Howard Dean, Kerry hopes to attract legions of small-dollar donors through the Internet.

Milwaukee attorney Robert Habush, former head of the Association of Trial Lawyers of America, supported former candidate and one-time trial lawyer John Edwards but plans to raise money for Kerry. He expects other attorneys to do the same.

"Considering our president hates us and has taken the trouble to put on his agenda a restriction of patients' and consumers' rights, I think it would be very easy to get trial lawyers engaged against President Bush," Habush said.

Among those lending Kerry a hand is Melvin Weiss, a New York attorney who stuck to the sidelines until his party settled on its nominee. He even formed a coalition of like-minded "Interested Democrats" who resisted candidate pleas for cash during the primaries.

With the nomination settled, the longtime Democratic fund-raiser plans to pursue as many $1,000 to $2,000 donors as he can for Kerry. New York venture capitalist Alan Patricof, a former fund-raiser for Wesley Clark, also has begun raising money for Kerry.

"We're all going to get behind him," Weiss said. "The Democrats want a winner and they're very pleased that the primary, what I consider sometimes a squandering of money, is over."

Kerry should be able to raise $1 million or more at a New York fund-raiser planned for April, Weiss said.

Kerry has raised about $24 million from donors as of Feb. 1 and spent nearly every dollar he took in, relying on personal loans of $6.4 million to keep his campaign alive in early January before his string of primary victories. He hasn't ruled out spending more of his own money, spokesman Michael Meehan said.

"Senator Kerry will leave open all of his options. He's going to do whatever it takes to beat George Bush," Meehan said.

The campaign finance reports of Kerry's former rivals suggest there are also plenty of big-dollar donors to be tapped. If everyone who gave $2,000 to Kerry's primary rivals sent that much to Kerry, it would yield more than $35 million for him, an analysis by the Political Money Line campaign finance tracking service found.

Kerry could approach a $1 million day in Florida by hitting several cities — perhaps holding a breakfast in Pensacola, luncheon in Jacksonville and cocktail party in Tampa, for example, Levin said.

"I think he's going to have a heck of a lot easier time getting money than votes down here," Levin said. "The money people I think will be there. Now, coming down and getting the votes, that I don't know."

Kerry was off the trail Thursday, meeting with aides before launching a Southern swing on Friday, spokeswoman Stephanie Cutter said.

Although the Democratic nomination is firmly in his grasp, Kerry is sticking with an aggressive campaign in the South designed to build support where he faces his biggest challenge in unseating Mr. Bush.

Kerry is also seeking to shape the political debate as the president launches his first television commercials.

Aides said Thursday that Kerry has no intention of slowing down and will visit Louisiana, Texas, Mississippi and Florida before those states select convention delegates next week.

"With the party as energized as it is right now, it's important not to rest," spokesman David Wade said.