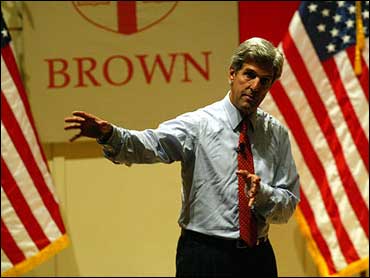 Two Democrats who might seek the White House again in 2008 criticized President Bush for his response to the devastation of Hurricane Katrina, assailing the suspension of wage laws while urging a concerted effort to aid the poor.

Sen. John Kerry of Massachusetts and former Sen. John Edwards spoke separately Monday on the government's handling of the catastrophe and on the broader issue of poverty in the United States.

In a blistering critique, Kerry said former Federal Emergency Management Agency Director Michael Brown was to Hurricane Katrina "what Paul Bremer is to peace in Iraq; what George Tenet is to 'slam dunk intelligence'; ... what George Bush is to 'Mission Accomplished' and 'Wanted Dead or Alive.' ... The bottom line is simple: The 'we'll do whatever it takes' administration doesn't have what it takes to get the job done."

Speaking to an enthusiastic audience at Brown University in Providence, R.I., the 2004 Democratic presidential nominee said the government's response to the disaster revealed a "broader pattern of incompetence and negligence" in the Bush administration.

In an interview after his speech, Kerry said: "What the president has done with FEMA has degraded it, politicized its responsibilities. It's irresponsible."

Edwards, the 2004 vice presidential candidate, said the hurricane was a sober reminder that widespread poverty exists throughout the nation. He said it will persist if the poor are concentrated in specific neighborhoods far from jobs.

"If the Great Depression brought forth Hoovervilles, these trailer towns may someday be known as Bushvilles," Edwards told an audience at the Center for American Progress, a liberal think tank in Washington.

"When the only shot many people have is a good job rebuilding New Orleans, the president intervened to suspend prevailing wage laws so his contractor friends can cut wages for a hard day's work," Edwards said.

In his unsuccessful bid for the Democratic presidential nomination last year, Edwards frequently talked of "Two Americas," one for rich, the other for the poor. In his speech, Edwards said Bush is wrong to think Americans aspire to create a "Wealth Society," but rather they wish for a "Working Society."

"To be true to our values, our country must build a working society — an America where everyone who works hard finally has the rewards to show for it," Edwards said.

CBS News Senior Political Editor Dotty Lynch reports that while at first blush these speeches might appear to be a coordinated Democratic attack on the President, the former running mates and their staffs engaged in a bit of jockeying for attention to their remarks.

Sen. Edwards has been sending e-mails and appearing on TV for the past few weeks talking about the hurricane and the "Two Americas" he spoke about in his 2004 campaign, Lynch reports. He spent Saturday in the early caucus state of Iowa talking about Katrina and poverty and set Monday's speech at lunch time in Washington where he would get maximum attention from policy wonks and national political reporters.

The Kerry camp took pains to alert reporters that Kerry would also be speaking on Monday although at Brown University in Rhode Island three hours after Edwards in Washington, Lynch reports.

Kerry aide David Wade said in an e-mail said that Kerry would be "provocative" and that while "this forum has been long on the schedule... as he thought about the meaning of Katrina, John Kerry threw way his original text and rewrote his speech to lay out what he believes is the challenge for America after Katrina."

The Republican National Committee said that while the country has pulled together during the crisis, "Democrats' efforts to politicize this tragedy are unsavory at best." The GOP organization said of Kerry's criticism: "Such tactics haven't served him well in the past and today is no exception."