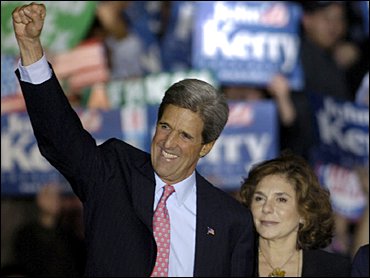 Sen. John Kerry, now with a numerical lock on the Democratic nomination, was to meet former rival Howard Dean Wednesday to plot strategy for the general election campaign against President Bush.

Kerry's victories in four Southern primaries Tuesday gave him enough delegates to claim the Democratic nomination for president at the party's convention in July, according to estimates by the CBS News Election And Survey Unit.

"George Bush is running on a slogan of 'steady leadership,'" Kerry said Tuesday in Chicago, as he celebrated his victories and campaigned in advance of the March 16th Illinois primary. "I think... if you measure the last four years and the failed policies, what you really have is stubborn leadership."

Kerry essentially locked up the contest for his party's nomination last week when Sen. John Edwards of North Carolina quit the race. But primaries and caucuses will continue to award delegates through June.

At least 2,162 delegates are needed to win the nomination at the convention that begins July 26th, and CBS News estimates indicate that Kerry's new delegate count is 2,174.

That includes 802 super delegates — Democratic officeholders, luminaries and party officials who aren't allocated by primaries or caucuses — who say they back Kerry.

Current estimates put the delegate count for the other candidates at 537 for Edwards, 158 for Dean, 59 for Wesley Clark, 26 for the Rev. Al Sharpton, 22 for Rep. Dennis Kucinich of Ohio, and 2 for Sen. Joe Lieberman of Connecticut.

CBS' Steve Chaggaris reports the Kerry camp was tempered in its reaction to the delegate count estimate showing their candidate has unofficially clinched the nomination.

"While everyone's delegate counts may vary somewhat, we'll continue to fight for the primary process to secure the delegates we need to win the nomination," Kerry spokesman David Wade told CBS News. "We believe that will be next week."

Kerry, who began Tuesday campaigning in Florida, used his Chicago speech to criticize the nation's new prescription drug program and argue that President Bush has done little to help the elderly.

"It must be getting lonely for George Bush," said Kerry. "It seems he's the last person left in America who actually believes his failed policies will ever work."

Kerry went on to aim yet another barb at Mr. Bush, who has been mocking him as having switched positions on various issues: "This president doesn't have a record to run on, only a record to run from, so he's already resorting to personal attacks."

Kerry and Dean, the former Vermont governor, will meet in Washington to discuss a possible endorsement. Dean, the one-time front-runner whose candidacy faded when the primaries began, has neither formally endorsed Kerry nor agreed to make available the list of Web supporters who helped him raise $41 million.

Before flying to Washington Wednesday, Kerry will first meet with workers at a Chicago contracting business and then address via satellite the top leaders of the AFL-CIO, who are meeting this week in Bal Harbour, Fla.

Kerry won the labor federation's endorsement last month and hopes to use labor's organizational muscle and money to boost his campaign. Although labor's share of the work force has declined over the years, union members are reliable voters, with 26 percent of those casting ballots in the 2000 election coming from union households.

Thursday, Kerry will meet with Edwards, who continues to be the object of speculation about whether he might be a good choice for the number two spot on the Democratic ticket.

Exit polls of voters in the four Southern primaries found that Edwards, a North Carolina senator, would be a popular choice in the region for Kerry's running mate. More than half the people surveyed said they'd like to see him on the ticket. Edwards is already lending a hand financially - as his best fundraisers compare notes with Kerry's top money seekers.

One of Edwards' selling points is that he could help Kerry in the South, despite winning only one primary. Political analysts tell CBSNews.com Chief Political Writer David Paul Kuhn that even one southern victory could wrap up the election for Kerry.

"I suspect the race is probably a little closer than those numbers suggest," Kiki McLean, a Democratic operative, told the CBS News Early Show. "But I think that George W. Bush is nervous about is the fact that he's vulnerable."

Ralph Reed, a Bush campaign strategist, told the Early Show that, "John Kerry largely got a pass in the Democratic primary. Howard Dean was the frontrunner. He imploded. John Edwards ran a largely positive campaign."

Reed said Kerry's record on issues like taxes, defense, the death penalty and others is only now being explored.

CBS News Correspondent Byron Pitts reports new television ads will hit the airwaves on Wednesday, one attacking each candidate. Neither are being financed by the candidates themselves.