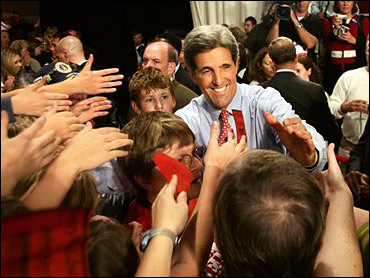 Four new national polls show Kerry getting a bounce from last Thursday night's debate. A CNN/USA Today/Gallup poll had the two candidates even at 47 percent apiece, while a Los Angeles Times poll gave the president a 2-point edge and a Zogby poll showed Mr. Bush with a 1-point lead.

All the results were within the polls' margins of error, making the race essentially even.

Mr. Bush journeyed Monday to the battleground state of Iowa to sign a $146 billion package that preserves popular tax breaks but also increases the deficit.

Speaking at a Des Moines YMCA, Mr. Bush said the measure extends "vital tax relief" and will "add momentum" to the growing economy.

"The law I sign this morning comes at just the right time for America," Mr. Bush said.

An estimated 94 million Americans will be affected by the tax relief, which keeps three middle-class tax breaks from expiring Jan. 1 and renews others for businesses. The tax cut also will swell the deficit, which is at a record high.

The bill extends the $1,000-per-child tax credit and shields married couples from the so-called marriage penalty.

Kerry backed the tax breaks in the Senate, saying they helped families being squeezed by a weak economy, falling incomes and rising health costs. But he has proposed rolling back the tax cuts for families making more than $200,000 and using the savings to make health care and education more affordable.

Kerry was campaigning in New Hampshire on Monday, where he said President Bush has sacrificed hopes for disease cures offered by stem cell research to "extreme right-wing ideology."

The Democratic presidential candidate, with actor and activist Michael J. Fox at his side, promised to fund more embryonic stem cell research with federal money if elected. A new campaign ad says it's time to "lift the political barriers" blocking the exploration of stem cell therapies.

"The hard truth is that when it comes to stem cell research, this president is making the wrong choice to sacrifice science for extreme right-wing ideology," Kerry said.

Kerry criticized Mr. Bush's decision to prohibit federal funding for research on embryonic stem cell lines created after Aug. 9, 2001. Some religious and conservative organizations oppose such research because days-old embryos are destroyed in the process.

Kerry called it "a far-reaching ban on federal funding for stem cell research, tying the hands of our scientists, driving some of them away from America."

Fox, who has Parkinson's disease, told voters gathered in a high school gym that Bush had "so restricted the stem cell lines available to us that it was kind of like he gave us a car and no gas and congratulated himself for giving us the car."

The Bush-Cheney campaign said the president's decision represents a federal commitment to using the promise of stem cell research in an ethical way.

While the presidential candidates were busy campaigning, their running mates were preparing for Tuesday night's debate in Cleveland. The debate at Case Western Reserve University between Vice President Dick Cheney and Sen. John Edwards, D-N.C., is the only debate scheduled between the vice-presidential candidates.

While vice presidential debates typically have little influence on the race overall, there could be extra interest in this face-off given the stark contrast between the rivals, Cheney's status as one of the most powerful vice presidents in history and the intense criticism he has drawn from Democrats.