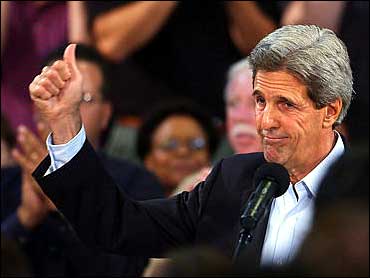 It was a bad August for John Kerry. Due to events in Iraq and a poor economy, many considered this Kerry's election to lose. Though not lost, the Kerry candidacy did lose its momentum.

However, Joe Trippi, Howard Dean's former campaign manager, insists that, "54 days is an eternity." With that many days left until the election, the Kerry campaign hopes Trippi is right.

Trippi recalls that the last time Kerry's candidacy looked lost was January 2003. Dean was running away from the Democratic pack.

But Dean learned what many of Kerry's rivals have: the Massachusetts senator is best when his back is against the wall.

A shakeup occurred in the Kerry campaign this past week. It has left the high road for the trenches. Democrats are playing hardball by attacking gaps in President Bush's Vietnam-era National Guard service.

Kerry is on message, saying the president's middle initial of "W," stands for "wrong war in the wrong place at the wrong time." The Democratic nominee says President Bush "rushed to war without a plan to win the peace."

Former members of Bill Clinton's team, including Joe Lockhart and Joel Johnson, are now senior Kerry advisers. Mr. Clinton himself spent over an hour on the phone with Kerry Saturday night. Crux: leave Vietnam in the past and focus on present needs in healthcare and jobs.

Following the Democratic convention in late July, Kerry was ahead (or tied) in most polls, a majority of Americans viewed Iraq as a mismanaged war and more had an unfavorable view of President Bush than of Kerry.

The mirror image is now true. What went wrong?

According to veteran strategists, three things: attacks on Kerry's Vietnam War record went unanswered, a Democratic convention went positive instead of driving a wedge between Kerry and Mr. Bush, and the Kerry campaign lacked a cohesive overall message.

"They only have two gears on their campaign: coast or fight. Like they did in 2003 when they almost lost it to us," Trippi says, speaking of Howard Dean's near victory. "[Democrats] stayed really positive and the mistake was not taking Bush on in the convention."

Trippi and many veteran Democratic strategists believe that the Kerry campaign erred by responding so slowly to anti-Kerry advertising by the Swift Boat Veterans for Truth.

The Swift Boat ads claimed Kerry lied about his war record, and upon his return from Vietnam, betrayed fellow soldiers by testifying to Congress about atrocities committed by U.S. soldiers.

"Kerry delayed directly responding to the lies of the Swift Boat smear," says Sidney Blumenthal, a former Clinton adviser. "I think that was less salient than his statement in response to Bush baiting about whether or not he would have voted for the congressional war resolution. That was the most serious error of all because it's substantive."

Blumenthal believes Kerry was never more off-message of late than when he stood above the Grand Canyon, walked up to reporters and answered President Bush's challenge.

The president had asked Kerry whether he would have supported the war today knowing the true state of Iraq's pre-war weapons programs. Kerry said, "Yes, I would have voted for the authority." The wished-for wedge between Mr. Bush and Kerry was washed away in a laundry of Kerry statements.

"Kerry was careful to explain his position in his complexity. The problem is that the complexity doesn't get reported and gets lost in translation," Blumenthal says. "It simply appeared that he conceded the major issue in the campaign to Bush."

Blumenthal emphasizes that, "Kerry had no reason to answer a hypothetical question framed by his opponent." The former Clinton adviser adds, "It is Bush the incumbent who has to answer questions about his record."

The Bush campaign made this an election about Kerry's record – his liberal votes in the Senate, his antiwar activism after Vietnam. Kerry was off-message and on the defensive, seemingly through all of late summer. As August came and Iraq seemed more stable, Kerry lacked the campaign message to maintain his strong position.

But Democrats remain optimistic. They say Kerry's a comeback kid, too.

"They are very much alive," Trippi says. "They could have put Bush away and now they have let him back in the game. But they now have to take a hammer to Bush, from the war to the economy."

Democratic strategist Peter Hart has "seen the shift back and forth." Hart, who's been working on campaigns for forty years, says, "elections always come back around to fundamentals."

The Kerry campaign is trying to bring the presidential race back to the fundamentals of Mr. Bush's first four years in office. Republicans say that's fine; Democrats believe the GOP frets a referendum on Mr. Bush's record.

But Mr. Bush made this election about Kerry's alleged waffling. "It was the classic, in sports, misdirection play," says Steve Grossman, a former chairman of the Democratic National Committee.

Compounding Kerry's problems, the Democratic convention defined the candidate in terms of Vietnam. Whereas, experts say, he should have been defined by his policy alternatives to President Bush.

While the Republicans confronted Kerry head on in last week's GOP convention, Democrats attempted to appear optimistic at theirs. Slogans like, "Help is on the way," did not show voters what they needed help from.

"We're underdogs. It's the exact same position John Kerry has found himself in the last 30 years," says Grossman, who has known Kerry for that many years and co-chaired Kerry's 1996 senate campaign.

In 1996, Kerry faced then-Massachusetts Gov. William Weld. With less than two weeks until Election Day, Weld led. But Kerry came back and won.

"In '84, '96 and against Dean in '03, if John Kerry has a hallmark," Grossman says, it's his comebacks. "John Kerry's campaigns always hit a lull where the focus and energy may slag a bit. But that always turns, as the campaign comes to its crescendo."