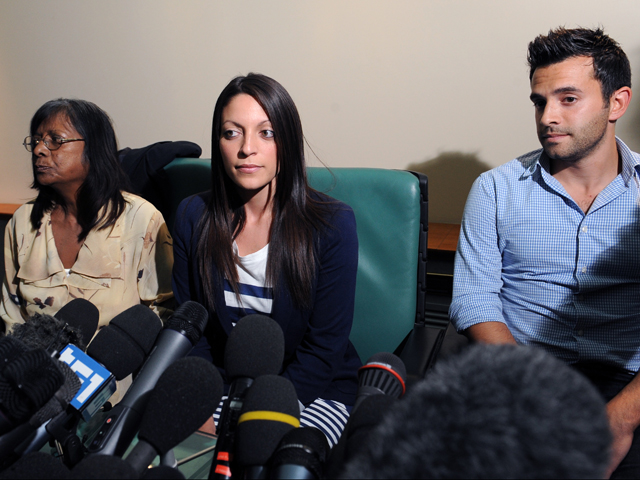 PERUGIA, Italy - The sister of slain British student Meredith Kercher says the 21-year-old has been forgotten in the trial of Amanda Knox and laments that "it's difficult to keep her memory alive."

Stephanie Kercher spoke to reporters as the eight-member jury deliberated the fate of Knox and co-defendant Raffaele Sollecito, who are appealing their 2009 murder convictions.

Stephanie Kercher, her mother and brother were in Perugia for the verdict, expected later Monday. At a press conference, Kercher said her sister "has been most forgotten" in the media circus surrounding the high-profile trial.

"I think what everyone needs to remember," said Stephanie Kercher, was "the brutality of what actually happened that night and everything that Meredith must have felt that night, everything she went through, the fear and the terror and not knowing why, and she didn't deserve that. No one deserves that, but she'd been here for two months, and, you know, she loved this place. It's a beautiful city. Even being here now, it's nice to be here, but it's very difficult to understand what happened that night without knowing the truth, and that's what we need to find."

Stephanie Kercher has urged the court to weigh the evidence against Amanda Knox and not pay attention to the "media hype" surrounding the high-profile case.

"As long as they decide today based purely on the information available to them and they don't look into the media hype, I think justice will be found," she told reporters.

The family, however, said they could understand the Knox family's media campaign.

"They fully believe in her innocence, you can't blame them for that," said Lyle Kercher, the victim's brother. "But it's obviously hard for us."

When asked if she believed the original convictions were good and should stick with it, Meredith's mother Arline Kercher said, "Well, I have to, in a way, because that's the only evidence we have at this point."

The family's lawyer said it wants the original verdicts upheld.

"The lower court found the defendants guilty. The Kercher family's interest is to have the verdict confirmed," he said.

Lyle Kercher remarked that showing graphic photographs of the crime scene in court last week were "sensationalist," but admitted, "that reinforced how horrific that really was."

"I think it's difficult to speak of forgiveness at this point," said Lyle Kercher. "Forgiveness - for what, really?"