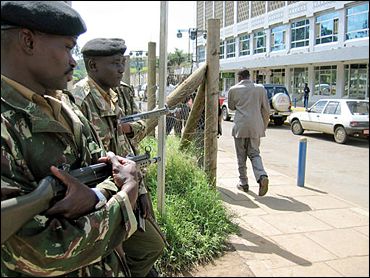 Riot police clashed with hundreds of demonstrators in Kenya's capital for a second day Wednesday, as protests continued over proposed constitutional amendments that critics say leave the president with too much power.

Police shot one man dead as he ran away with goods he allegedly stole from a store selling cell phones during the chaos, Nairobi's police chief King'ori Mwangi said.

Mwangi said the man was among a group of looters who sought to benefit from the unrest that forced some businesses to close early in central Nairobi.

But police spokesman Jaspher Ombati said late Wednesday that shopowners had raised the alarm when their shops were being looted and a skirmish had ensued between them and the looters.

Ombati said in a statement that police had found an unidentified man lying on the floor outside the shop bleeding profusely. The man later died of his injuries, Ombati said.

The confrontations began as skirmishes early Wednesday, but escalated into violent clashes as the day progressed.

Police beat several placard-holding demonstrators with batons and threw tear gas at them as other demonstrators stoned the police earlier Wednesday. Police were keeping protesters away from the National Assembly building in downtown Nairobi.

An Associated Press photographer saw police detain five protesters. The photographer also saw one demonstrator beaten by police left unconscious on the street before passers-by took him to the hospital.

Another demonstrator surrendered to riot police, who then beat him with batons while scores of protesters threw stones and taunted the officers as hundreds curious onlookers watched from a distance.

Ombati said a total of 20 protesters were arrested. "The demonstrators turned riotous and started looting and destroying property. This forced the police to move in to disperse them with a view to restore normalcy," he said.

Clothes and a radio which had been looted were recovered, said Ombati. The windscreens and windows of several vehicles were also broken.

Elsewhere in the capital, scores of polytechnic students stoned the police who responded by firing tear gas.

The demonstrators, taking part in the second of three days of planned protests, are opposed to plans spearheaded by allies of President Mwai Kibaki to change the draft constitution in an effort to retain the president's powers and weaken those of a proposed prime minister.

Lawmakers on Wednesday began debating the changes and other parts of the constitution, before a constitutional referendum tentatively scheduled before year's end.

Wednesday's newspapers reported that similar protests took place in two other major towns Tuesday and dozens of people were injured in skirmishes with the police.