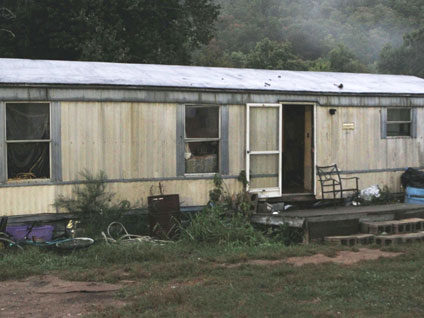 JACKSON, Ky. (CBS/AP) Authorities say a man known for his hot temper snapped Saturday morning over how his wife cooked his eggs, killing her and four others with a shotgun before shooting himself.

Trooper Jody Sims of the Kentucky State Police said Neace killed the five people in two mobile homes, then went to his own home and shot himself. The victims were identified as the gunman's wife, 54-year-old Sandra Neace, her 28-year-old daughter Sandra R. Strong, and neighbors Dennis Turner, 31, Teresea Fugate, 30, and 40-year-old Tammy Kilborn.

Sherri Anne Robinson, a relative of Turner and Fugate, said witnesses to the shootings told her that the shooting rampage occurred after Neace became irate when he was displeased with how his wife cooked his eggs.

"Over eggs?" Robinson said. "I thought that was crazy. Really. I mean just because his eggs weren't hot?"

Kentucky State Police spokesman Tony Watts said they are still trying to determine what exactly happened during the rampage.

Robinson told officials that Fugate, her sister, was shot in front of her 7-year-old daughter.

"Her daughter said, 'Please, please don't shoot me,' and he said, 'All right, you can leave,' and she ran out," said Robinson, who spoke to her niece after the shootings. "She went and told her neighbors, and the neighbors called the law."

Neace's hostile temper was apparently escalating over the past few months, so much so that it forced his landlord to start eviction proceedings.

"He was unpredictable," said landlord Ray Rastegar. "Little things would set him off."

The bodies of Neace and his five victims were sent to the state medical examiner's office in Frankfort for autopsies.