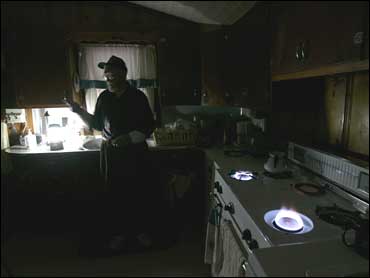 As hundreds of thousands of Kentuckians lingered in the dark nearly a week after an ice storm wrecked the state's power grid, National Guard troops prepared to go door-to-door to check on residents.

Utility crews worked feverishly to restore electricity amid the largest state power outage on record. Guardsmen cleared roads with chain saws and some residents bundled up for another night around a wood-burning stove, looking for any way possible to stay warm.

With more than 700,000 Kentucky homes and businesses still without electricity Saturday, the state was a long way from recovering after an ice storm left a swath of destruction throughout the nation's midsection.

Kentucky was the hardest-hit. Monday's icy wallop encrusted a large part of the state in a mantle so thick it shattered utility poles, toppled trees and drove thousands from frigid homes to shelters. Officials had previously reported that 607,000 Kentucky customers were without power, but later said that figure didn't include municipal utilities or rural electric cooperatives within the Tennessee Valley Authority system.

Meanwhile, officials told those still shivering in dark, unheated homes to seek safe refuge in motels and places with power or generators.

"Too many people are trying to tough it out at home," Lt. Gov. Daniel Mongiardo said.

Kentucky Gov. Steve Beshear on Saturday deployed every one of his Army National Guardsmen. Authorities said they were investigating roughly a dozen deaths in Kentucky alone. A Louisville man who had been burning charcoal in a grill inside an apartment was apparently killed by carbon monoxide poisoning, the latest weather-related death.

The storm that began in the Midwest has been blamed or suspected in at least 42 deaths, including nine in Arkansas, six each in Texas and Missouri, three in Virginia, two each in Oklahoma, Indiana and West Virginia and one in Ohio. Most were blamed on hypothermia, traffic accidents and carbon monoxide poisoning.

Finding fuel - heating oil along with gas for cars and generators - was a struggle for those trying to tough it out at home. Hospitals and other essential services had priority over the public.

At an independent-living community in southwest Kentucky, apartments were pitch black at night but for candles, lanterns and flashlights that created a soft glow.

The ice storm had Sanders longing for her old home in Florida.

Some 4,600 Guardsmen have been pressed into service.

"I was supposed to report this morning for my first weekend drill," said Fox, fresh from completing a four-year Army stint that included two tours in Iraq. "As it turns out, I'm activated."

Residents awaited relief amid warnings the outages could continue for weeks in some remote areas. The governor was undeterred when asked about how the state would pay for the recovery.

"The most basic duty of government is to protect the lives and safety of our people, and we have been pulling out all the stops and will continue to do so," Beshear told The Associated Press.

The city of Paducah was under a nighttime curfew. Capt. Don Hodgson of the Paducah police department said as of Saturday night there had been very few violations in the western Kentucky city of about 25,000.

Nearby, Angel Wyant has been eking out the days with the heat from a kitchen frier connected to a handheld propane tank.

"And a carbon monoxide detector," she points out, mindful of the dozens of deaths caused by the storm.

But the makeshift heater isn't much good when night falls, so Wyant, 32, and her three children have been staying overnight at the home of neighbor Rita Kelly, 53.

"We huddle around the old wood stove," said Kelly, whose two-bedroom aluminum sided house now shelters six people. After days of searching empty shelves, she and her husband bought a generator Saturday and were trying to hook it up.

"We about tapped out of money after buying that thing," Kelly said with a weak smile.
By Associated Press Writer Roger Alford; AP writers Malcolm C. Knox and Janet Cappiello Blake in Louisville, Ky., and Bruce Schreiner in Mayfield, Ky., contributed to this report