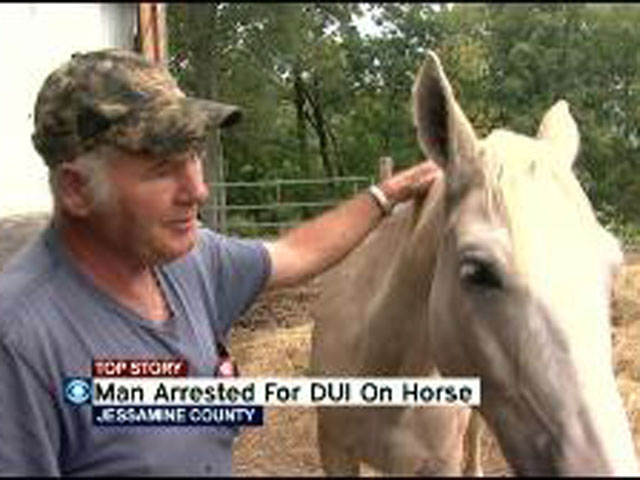 (CBS/WKYT) JESSAMINE COUNTY, Ky. - Police say they arrested a Kentucky man for DUI because his blood-alcohol level was double the legal limit while operating a non-motorized vehicle.

The "vehicle" was a horse.

Danny Reynolds, 55, said he was trail-riding with some friends on a road near his home in Jessamine County when he had to stop and take a break, CBS affiliate WKYT reports.

"I'm severely diabetic, so I stopped to eat some crackers to bring my sugar levels down when the deputy arrived and told me to get off my horse," he said, according to the station.

Reynolds admitted to drinking a couple of beers. "I normally don't drink, but we were celebrating my son's birthday."

He told WKYT that police arrested him after he staggered while dismounting from the horse, but that he was light- headed due to his diabetes not because he was drunk.

According the arrest citation, Reynolds' blood alcohol level was twice the legal limit, WKYT reports. The arresting deputy said Reynolds had in his possession marijuana, several beers and a mason jar which he identified as moonshine.

Kentucky law prohibits the operation of a non-motorized vehicle - including horses - while under the influence of intoxicants or substances which may impair a person's driving ability, the station says.

"It's a very unique case," said Chief Deputy Allen Peel. "But he could have swerved into a car, causing danger to himself and others."

"I really didn't mean to cause any harm," Reynolds reportedly said. "I definitely learned my lesson and I hope other riders pay attention."