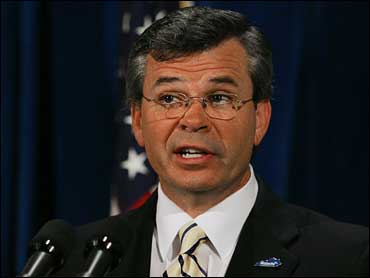 Ernie Fletcher on Monday granted blanket pardons to current and former members of his administration who have been charged in an investigation into alleged improper hiring.

The move came on the eve of Fletcher's appearance before a grand jury investigating his administration's hiring practices.

"I cannot allow state government to continue to be consumed by this game of political 'gotcha,' paralyzing our ability to serve you, the people of Kentucky," Fletcher said at the Capitol Rotunda.

Fletcher said he would appear before the grand jury but would not testify. The grand jury was impaneled in June and has charged nine current and former members of Fletcher's administration with misdemeanor violations of the state's personnel law for allegedly basing hirings on political considerations rather than merit.

Some of those charged are senior members of the administration, including deputy chief of staff Richard Murgatroyd and acting Transportation Secretary Bill Nighbert. Fletcher said the senior managers provided "inadequate oversight" of younger people.

Also among the nine is a former Fletcher administration member who has been indicted on 22 felony counts of evidence or witness tampering.

Fletcher said anyone who violated the law could face penalties imposed by two administrative agencies that are also investigating.

Democratic Attorney General Greg Stumbo said in a statement that Fletcher has "slammed the door on the public's right to know what wrongs his administration has committed."

Fletcher, a Republican, repeated his accusation that Stumbo has been carrying out a political vendetta and compared most of the charges that have been brought to minor violations of fishing laws.

A spokesman said state government paid $1,200 for satellite time to beam the governor's remarks around the state.

Prosecutor Scott Crawford-Sutherland has said the grand jury's investigation will continue even if Fletcher issues pardons.

Fletcher's decision was criticized by Democratic state legislators, with Rep. Kathy Stein saying the pardons are grounds for the General Assembly to consider his impeachment.

"He is showing a broad disrespect for the criminal justice system that every other citizen in the commonwealth must live with," Stein said.

Mike Duncan, a Kentuckian and general counsel to the Republican National Committee, said Fletcher should be commended for the pardons.

"I think the governor made the right decision because we need to move the state forward," Duncan said.

Joe Gershtenson, director of the Center for Kentucky History and Politics at Eastern Kentucky University, said pardons could cut both ways with voters.

"Pardons are risky, absolutely," Gershtenson said. "They inevitably create at least some perception that there's some guilt. Why pardon if somebody isn't going to ultimately get convicted?"