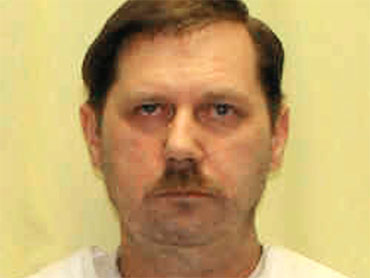 "Now I am paroled to my Father in heaven, and I will spend all my holidays with my Lord and Savior," Biros said, according to the Columbus Dispatch. "Peace be with you."


Biros was pronounced dead at 11:47 a.m. Tuesday, about 43 minutes after members of the execution team began preparing him by attempting to insert IV needles at the Southern Ohio Correctional Facility in Lucasville.

The actual execution appeared to last just 10 minutes, about the usual length of time in the past when Ohio used a three-drug method. The execution team appeared to have trouble finding usable veins but eventually completed the process after about 30 minutes.

Biros' chest heaved up and down several times and he moved his head a couple of times over a period of about two minutes before his body stopped moving. He apologized for his crime and thanked his friends and family for supporting him. I'm "sorry from the bottom of my heart," he said, according to the Columbus Dispatch.

Biros was sentenced to die for the sexual assault and murder of Tami Engstrom, 22, in northeastern Ohio in 1991. He then scattering her body parts in Ohio and Pennsylvania. Biros confessed, but claimed it happened in a drunken rage.

The mother, sister and brother of Engstrom applauded as the warden announced Biros' time of death.

Ohio changed its execution method from three drugs to a single anesthetic following a failed attempt at putting a different inmate, Romell Broom, to death in September.

The new method involves a large dose of the anesthetic thiopental sodium. It is similar to how dogs are euthanized, experts say, and is believed to be painless.

Other states still use a combination of three drugs.