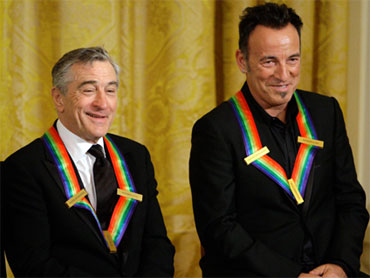 Caroline Kennedy invoked her father's vision for grace and beauty in the White House when she introduced the Kennedy Center honorees -- Mel Brooks, Dave Brubeck, Robert DeNiro, Grace Bumbry and Bruce Springsteen -- in a ceremony broadcast Tuesday night on CBS.

The ceremony at the Washington, D.C. arts center named after the late President John F. Kennedy actually took place on Dec. 6, the day after the five honorees received their medals at a State Department dinner hosted by Secretary of State Hillary Clinton.

Before the ceremony, the honorees were receieved at the White House by President Obama and first lady Michelle Obama.

The Obamas were seated in the box next to the five honorees as entertainment legends saluted them from the Opera House stage. De Niro, an acting legend, was introduced by fellow Oscar winner Meryl Streep and, after a film clip of his career, was saluted by actors Harvey Keitel, Sharon Stone, and Edward Norton and Oscar-winning director Martin Scorsese.

A jazz legend, Brubeck was honored on the evening of his 89th birthday, and his sons joined musicians on-stage to sing "Happy Birthday" to him. Grammy winner Herbie Hancock made the introductions, and the Brubeck All Stars and the Jazz Ambassadors of the U.S. Army Field Band provided the musical salute.

The Queen of Soul, Aretha Franklin, introduced the tribute to opera's royalty, Bumbry, which included a clip of the opera singer's performance on world stages and a performance by Romanian singer Angela Gheorghiu.

But the tribute that the brought the house down was the one for Springsteen, introduced by "The Daily Show" host Jon Stewart, who professed to know little about rock music, then added, "But I'm from New Jersey!"

Springsteen, the legendary Jersey Shore rocker, who performed at President Obama's inauguration, was saluted by author and Vietnam vet Ron Kovic and singers John Mellencamp, Ben Harper, Jennifer Nettles, Melissa Etheridge, Eddie Vedder and Sting, all singing Springsteen hits. What got the audience to its feet was Sting's rendition of "The Rising," backed by a gospel choir.